e-edition   |   pdf
ON THE COVER:
The Next Austin Bust
features

Trump’s Twitter Library, a Ferris Wheel of Cheese, and More From the Wide, Weird World of SXSW

And other ways to connect with the Chronicle at SXSW
news

Now and for her whole life, the rising star finds her own path to victory

The Next Austin Bust

Will it be bad? Can we be ready? Or should we not care?

Michelle Obama, and All Who Love Her

Public Notice: CodeCRONK and the Corridors

How to fix land use and transportation

“Troubling Data” From APD on ICE

The Next CodeNEXT Put Off for Another Day, Again

SB 15, the boy who cried "voter fraud!" advance, and other Lege news

BY MICHAEL KING AND MARY TUMA

Predicting the future of food

People are hungry for information about policy, sustainability, and curbing a global food catastrophe. And wine.

Why Is Austin Such a Promised Land for Food Entrepreneurs?

The land of milk and honey and consumer packaged goods

ATX rap vets double down with an assist from Gary Clark Jr.

Welcome to the ATX shoegaze revival

From the Indigo Girls to a celestial, Cocteau Twins-infused shoegaze comer

Local punk supergroup gets all Dickies

Explosive rock troupe gets Big Star(s) in its eyes

After the Bastrop fires, Deezie Brown pursues happiness over Lamborghinis

Generations old and new nab honors and rock the Moody

By legs, Lyft, or Lime scooter, get to the following 15 acts

Female filmmakers take the forefront of SXSW this year

Saint Frances Takes a Charming and Honest Look at Pregnancy

Millennial comedy and the things women don't want to talk about

Tackling Inherited Trauma in SXSW Film Mickey and the Bear

The Garden Left Behind Bears Witness to Anti-Trans Violence

This Is Why You Have No Friends

Stories of outsiders, and the in-crowd that hates them

Small-town sins follow an unlikeable person in this likable film

Going on the Offensive With The Art of Self-Defense

Austin's Queen of Soul Is Weird Made Flesh in Becoming Leslie

A personal look brings the local legend into posthumous focus

An Unconventional Campaign History in Running With Beto

Innovating an End to Austin Street Life in Community First, A Home for the Homeless

Getting a second chance at a home

A glimmer of hope amid Austin development in Nothing Stays the Same: The Story of the Saxon Pub

Screams and laughs balance out on the supernatural side of life

Prepare for the return of the vampire

With Darlin’, Pollyanna McIntosh Is Part of the Rising Tide of Female Horror Directors

Time for a bloody change

From fake religions to Civil War silliness, there’s always something to laugh about

Bow Down and Pay Up for J.R. “Bob” Dobbs and the Church of the SubGenius

The power of slack compels you in this SXSW documentary

Lynn Shelton and Marc Maron Wield a Sword of Trust

A question of trust in this new comedy

Eugene Mirman Gets Intimate in It Started as a Joke

Documenting the 10-year run of an underground comedy revolution

The actor headlines SXSW in opening night film Us, and probes the cost of fame in Her Smell

Women used to be an afterthought in professional wrestling: not anymore

What you see (and immersively interact with) is what you get

Will Communal VR Be the New Cinema?

Robert Rodriguez Returns to His DIY Roots With Red 11

Who the Hell Wants to Watch Cat Videos in a Theatre?

Everyone, when they’re curated by CatVideoFest

The Gospel of Eureka

Godard's final experiment is more thesis and installation than film

US soldiers versus the cartels, but it's all about the benjamins

The original mad black woman faces her mortality, and the end of the series

A satirical look at what lies ahead for humanity, as the SpaceX founder might envision it

This "type of padded cell of Southern culture" is, pardon us, insanely beautiful
columns 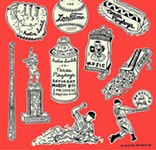 Whether or not you’re carrying a badge, we’ve got the q’d events for you

Barbecue and beer come together in Garland

Luv Doc: The Definition of a Double Standard

There's no difference other than the equipment 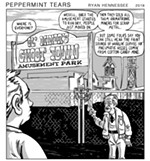