Prepare for the return of the vampire 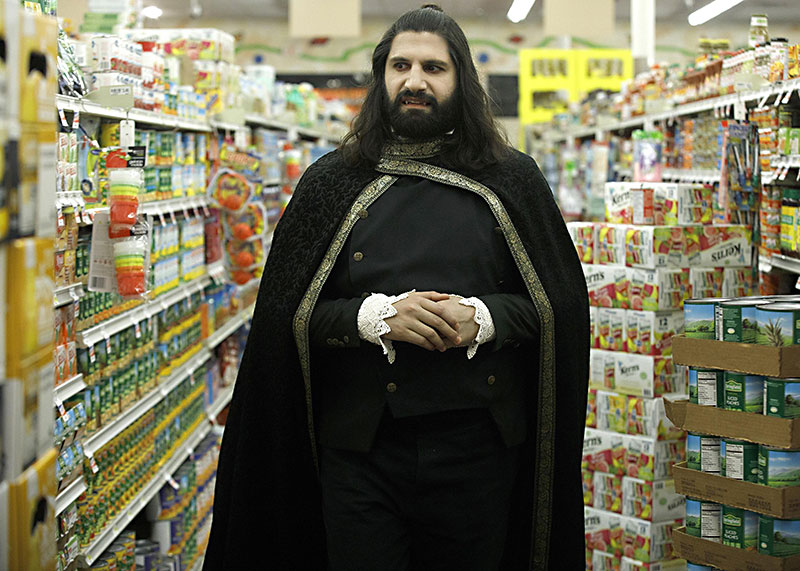 (Staten) Island of the damned: Kayvan Novak as vampire Nandor in FX’s TV spin-off of What We Do in the Shadows

Perhaps the only thing more joyful than FX's pilot episode for the new series What We Do in the Shadows is Natasia Demetriou's reaction to being able to play a bloodsucking demon of the night. The original 2014 mockumentary of the same name by Taika Waititi and Jemaine Clement (who also directed the pilot and serve as showrunners) followed a group of male vampires who live together in New Zealand: In a refreshing change, the TV series adds a lovely lady, Nadja, to the mix. She's a vampire who loves boasting about her previous love affairs and rolling her eyes at the two undead men – lecherous dimwit Laszlo (Matt Berry) and house leader Nandor (Kayvan Novak) – she is forced to tolerate as housemates.

Immediately, Demetriou slides in that she's positive her family is actually made up of vampires. "My Greek relatives I think probably are vampires. ... I took a lot from my Greek female relatives when I was doing the character."

Demetriou's cultural background helped her dive into Nadja's flair for the dramatic, and it added an unexpected bond with Clement. "[Jemaine] has a Greek wife, Miranda – who is amazing. He would often talk about her Greek family and the women in [it] and how they would react to that situation. That little fiery Mediterranean way of doing things."

Demetriou plays Nadja as the perfect sex bomb. She swoons wistfully while daydreaming about lovers, and her carnal desires in the series are currently fueled not by her beau Laszlo, but by a human who looks exactly like a knight she accidentally killed in bed hundreds of years ago (played by Jake McDorman). One man she is not interested in (as of the moment) is Nandor. A soldier from the Ottoman Empire, he takes on a similar role to that of Waititi's Vladislav in the feature film – delightfully eager and charming as he overdramatizes everything for the cameras. His big entrance involves his familiar, Guillermo (Harvey Guillen), shaking jazz hands in his direction as he (not so gracefully) emerges headfirst from his coffin.

The riotous 30-minute pilot is crammed with wonderful references to some of the biggest vampire films in the zeitgeist, like Interview With the Vampire, Twilight, and a sly nod to FX's other, more horrific, bloodsucking show, The Strain. But among the carefully plotted details and homages, there was still space for improvisation. On a trip to the grocery store to get ready for a grand guest's surprise arrival, Guillermo trudges begrudgingly behind Nandor and his massive velvet cape as he eagerly shouts decorating ideas. Guillen said, "The way [Jemaine and Taika] like to work is by encouraging other [ideas] and keeping it very natural."

"[The show] manages to be ghoulish and hilarious at the same time," Novak added. It's this juxtaposition of these horror icons getting shoved into extremely average, everyday situations that keeps the series just as charming as the film. Nandor and Guillermo's relationship as master-and-familiar might even be more endearing than that of Vladislav and his servant Jackie in the film (Nandor's anniversary gift to Guillermo is just as incredible as it is insultingly dismissive).

"What you take from all the amazing vampire context in the world," said Demetriou, "is how serious they take themselves. It's all very sexy and dramatic and I think that's where the good comedy lies. ... The moment someone treads on a cape or trips up, that's where the comedy comes from, because it's all so high stakes."

Friday, March 8, 10pm, Paramount
Find What We Do in the Shadows libraries scattered throughout town, filled with free vampire novels and opportunities to win more prizes. These pop-ups can be visited at three Austin locations: El Naranjo (85 Rainey), Bat Bar (218 E. Sixth), and Iron Works BBQ (100 Red River). March 9-12, dusk to midnight.
A version of this article appeared in print on March 8, 2019 with the headline: Return of the Vampire