Small-town sins follow an unlikeable person in this likable film 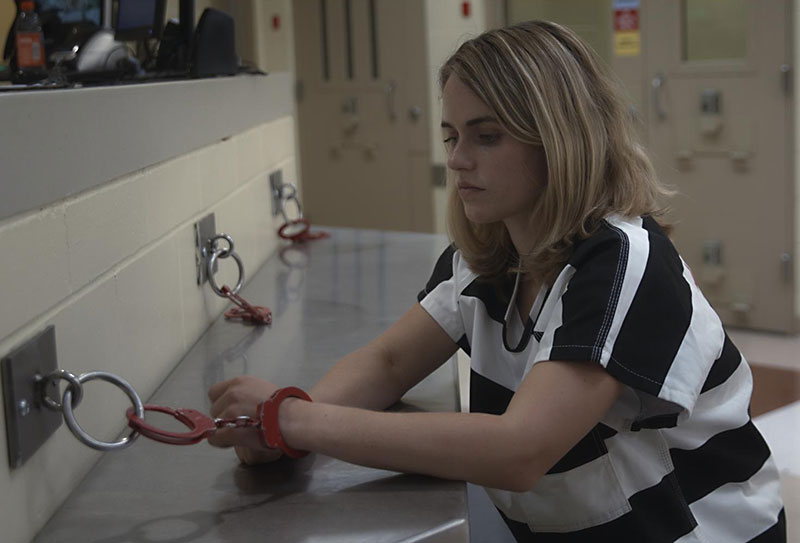 Frances Ferguson is a likable film about an unlikeable person, and if any phrase can be used to describe the work of Austin director Bob Byington, that one may as well be carved in stone. "I don't think I seek out the outcast," Byington said. "It's that the storytelling tends to head in that direction, and then we hire charismatic actors to make up for that."

Byington's films are often defined by protagonists with a misanthropic streak – the grating, the deliberately awkward. Stories like 7 Chinese Brothers have put off-putting men in front of the camera. This time, enter Austin actress Kaley Wheless as the eponymous Frances, a perfect addition to Byington's rogues' gallery. A substitute teacher in small-town Nebraska, she becomes a celebrity of sorts after a transgressive little sin and sees the life she thought she despised fall away. Wheless said, "We'd been workshopping a short piece about a millennial character, where the main focus was her attitude, and that she was very blasé. Then I remember Bob seeing a New York Post article about one of these female teachers having a relationship with her student, and getting caught, and the whole media storm that followed."

It's ripped from the headlines – or rather, in keeping with Byington's quiet sense of observation, neatly clipped and curated. It's also territory that he has tackled before, in his 2008 comedy RSO [Registered Sex Offender]. But while that film had the archetypal male sleazebag at its heart, the more Byington and Wheless looked into these student/teacher stories, the more cases they found "of younger teacher women in their mid-20s, [and] they look kind of similar," said Wheless.

That began what Byington called "an organic shift from the short into the feature," which kept Wheless aboard not simply because she had been there first, but because she was on his creative wavelength. He said, "I'm always attracted to language in a movie, and so the language is very specific. Every word in the film is curated, and we couldn't have done that without her. And Nick."

Nick being Nick Offerman: The laconic, burly comedian returns for his fifth run with Byington (after RSO, Somebody Up There Likes Me, Infinity Baby, and the oft-forgotten 1999 comedy Treasure Island, which starred both Offerman and Byington and was written by Frances Ferguson scriptwriter Scott King) as a narratorial voice. Wheless said, "We were playing with people's perception of her, and this crime in a small town, and the way she was being looked at and ostracized by everyone, and to have someone like Nick talking about it from the outside when you're put in the position of the town to watch her and look at her a little differently, I think it just highlighted that element of her being under scrutiny, of people looking at what she's doing and not being sure of why she's doing it."

But who exactly is the narrator? Traditionally, they have been a proxy for the author, and that was undoubtedly a component here. Byington said, "We felt slightly more judgmental about the town than what she did, and our narrator probably feels sympathetic to Fran. ... He likes her, and wants to see good things for her."

Yet there's a feeling of the narrator having their own agenda, of being less a deus ex machina and more a character just out of sight, or a fellow audience member adding an informed commentary on events. Per Byington, rather than booking a professional recording studio, he and Offerman captured the narration on an iPhone over a dozen or so sessions. Byington recalled, "and then we plugged it into an audio fixer to try to make it all sound alike." Yet what really binds it together is Offerman's delivery, which Byington loved for its "rough-hewn quality. ... There's something loose about the narration. It's opinionated. He'll laugh. He'll mess up a word."

The narrator's sympathy for Frances makes the town the real antagonist of the story, and so enter the film's most unlikely star: North Platte, Nebraska. Home of the world's biggest rail yard, formerly the western terminus of the Union Pacific Railway, and located near the Buffalo Bill Ranch State Historical Park, it's the kind of town you only go to if you're nearby to begin with. Fortunately for location scouting for Frances Ferguson, Byington grew up 70 miles east along US-30 in the (relatively) bustling metropolis of Lincoln, while Wheless grew up across the state line in Boulder, Colorado.

Anyone who has lived in that kind of middle-of-nowhere, hang-out-at-the-Walmart, can't-get-there-from-here town can empathize with how that sense of claustrophobic isolation can crawl under your skin and curdle your patience. For Wheless, that explains a lot of Frances' "blasé, unbothered, and bored demeanor. [She's] a product of the town, and of the environment that she feels likes she's mired in, but doesn't necessarily fit into, and that all aspects of life there don't feel right. Even if it wasn't an awakening, having a relationship with the boy, anything was better than what she was living – even prison."

There was a pragmatic component for picking North Platte over staying at home and shooting in Austin (they wanted to shoot in September, and no one in their right minds would shoot exteriors in the soul-sucking heat of the Central Texas summer). However, shooting in the remote city (pop. 23,888 and falling) wasn't exactly the glittering lights of Hollywood. Byington said, "There was a moment when the crew hated me for making them come to North Platte, because there was no escape. And I hated them for hating me."

"There was a lot of hating going on," added Wheless. But, she added, there was something about the isolation that informed her performance. "I was experiencing the same claustrophobia that Fran was. Maybe not on the same scale, because I hadn't committed a crime. Still haven't."

A version of this article appeared in print on March 8, 2019 with the headline: Small-Town Sins