An Unconventional Campaign History in Running With Beto 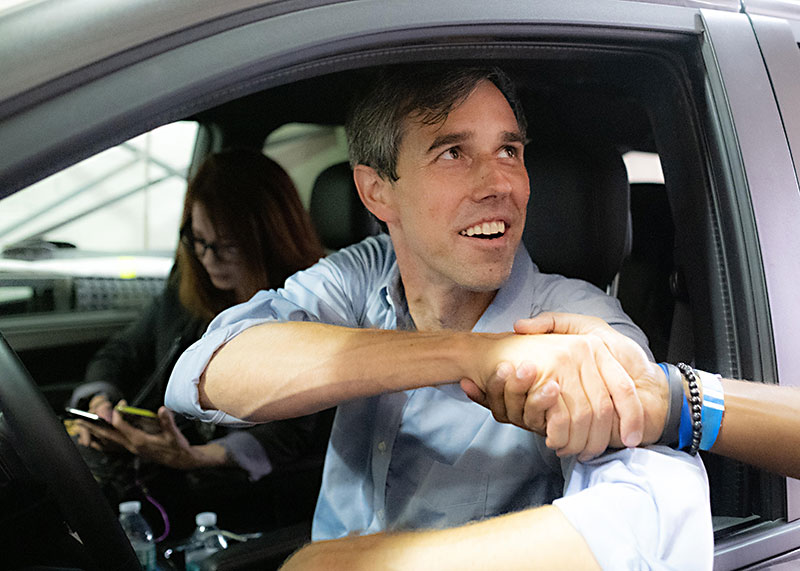 An unconventional campaign deserves an unconventional campaign biography, and Austin-based director/producer David Modigliani began the process of making his documentary Running With Beto in a suitably unconventional way. He met Beto O'Rourke in April 2017, on a sandlot baseball field where Modigliani's Texas Playboys, an Austin amateur hardball club, faced off against O'Rourke's El Paso team, Los Diablitos. Modigliani was a playwright-turned-documentary filmmaker (including his 2008 portrait of outgoing President George Bush's hometown, Crawford), and O'Rourke was a fairly obscure congressman who had taken it into his head to run for the U.S. Senate. But an impromptu post-game speech on a hay bale persuaded Modigliani that the lanky center fielder might be "a generational political talent" with "a magnetic personality that could make his race more than just a statewide story."

Modigliani pitched the idea of a campaign documentary to O'Rourke and his campaign, and by November had received full access and creative control. The film was independently funded and the campaign had no approval rights. "It's a testament to him that he was willing to do that," said Modigliani, "and a testament to the transparency that he was trying to build into the campaign."

O'Rourke made a commitment to visit all 254 Texas counties. The film crew didn't keep up with the entire schedule, Modigliani said, but did total 47,000 miles of Texas highways and 700 hours of footage. "The campaign kept up a seemingly inhuman pace," he said. "They rarely stopped for lunch, and kept the motor running when they stopped for bathrooms. ... It was a privilege to travel with them, and to see the amazing energy in these small towns, many of which had never been visited by any campaign." (Surprisingly, O'Rourke did most of the driving himself – Modigliani said he preferred being "in the driver's seat," but also believed his staff was better employed working the phones, schedules, and social media.)

The film catches the headline moments – O'Rourke's heralded statements on gun control, immigration, and NFL-player protests ("I can think of nothing more American"), along with a few reflexive shots from GOP incumbent Ted Cruz ("big-government, gun-grabbing liberal"). But it also carves out smaller subjects in the determined but not always overjoyed support from O'Rourke's family, as well as three volunteers who become part of the larger narrative: Amanda Salas (McAllen), defying her conservative parents; Shannon Gay (Bulverde), a no-nonsense TexFeminist; and Marcel McClinton (Houston)*[see correction below], a gun-violence survivor who helps coordinate gun-control events, especially in the wake of the May 2018 mass shooting at Santa Fe High School.

"They became representative," Modigliani said, "as well as a Greek chorus in a way. ... At the end of the film, as they try to process the defeat, they give the feeling that this is the beginning of something rather than the end of something."

There are other Austinites on the film team, among them producers Rachel Ecklund and Rebecca Feferman, a veteran of SXSW's booking team introduced to Modigliani through South By Director of Film Janet Pierson. (SXSW Film Festival founding Director Nancy Schafer, later of Tribeca, is yet another producer on the film.) Feferman's been involved in all aspects of the business side of the production, as well as occasional brainstorming with the director. Because of her personal history with the Festival, she said, "It's been something really cool to get it shown at South By." Feferman described the group as "a really great team" and said of Modigliani, "He had really strong vision for why he wanted to make this film."

Right now, Modigliani is immersed in the finishing touches on Running With Beto before its SXSW premiere and its broadcast debut on HBO later this spring. He's unsure what will happen next – for him, or potential presidential candidate O'Rourke. "We'll have to see what happens," Modigliani said. "He's certainly shown that he connects with people in unique ways, and he would run an unconventional race. I don't know that he will run, and right now for me, the job at hand is to finish telling the story of this campaign."

*Correction: Marcel McClinton's name was originally misspelled, and has been corrected.