Eugene Mirman Gets Intimate in It Started as a Joke

Documenting the 10-year run of an underground comedy revolution 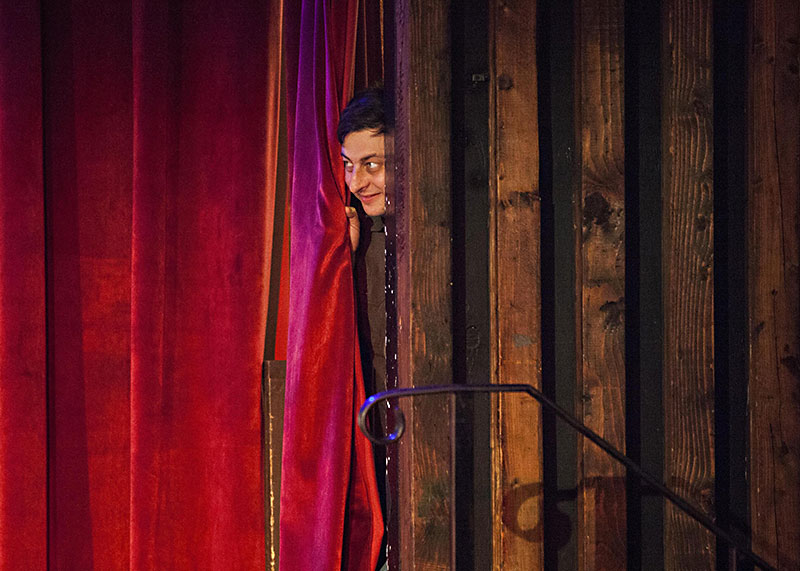 Comedian Eugene Mirman calls documentary It Started as a Joke “the most personal thing I’ve ever been a part of.”

How to describe the alternative comedy of the Russian-born comic Eugene Mirman, familiar to many as the voice of Gene Belcher on Bob’s Burgers? Wacked, whimsical, absurd, playful? Heavy on the conceptual satire? Mirman would add warm and anecdotal. Back in 2008, Mirman and a few of his comedian pals from the found-space, downtown Brooklyn comedy scene got to riffing about the then-popular Manhattan (Uptown and Midtown) comedy festival scene with its big corporate sponsors and, to them, silly, meaningless programming groupings, like the “Uptown Comics” or “Nice Jewish Ladies.” That material proved comedy catnip, and the one-off show they put on morphed into a 10-year run of the eponymous Eugene Mirman Comedy Festival, which Mirman friends Julie Smith Clem and Ken Druckerman made into the documentary It Started as a Joke.

Clem’s film treats us to a delicious buffet of all your favorite stand-ups – from Janeane Garofalo, Mike Birbiglia, Jim Gaffigan, Bobcat Goldthwait, and Kumail Nanjiani to Michael Ian Black and Wyatt Cenac, to name just a few – and, of course, Mirman himself – much of it sampled from the final farewell show. Since it’s Mirman's festival, his on- and offstage goofiness infuses not only the program itself (the sidewalk bouncy castle with a therapist inside, the clown in a sandwich board offering free tax advice, the ironic show sets “Comedians You’ll See in a Cell Phone or Cream Cheese Commercial in 2-3 years” and “Comedians Who RBG Would Enjoy”) but also the performances – or, maybe more accurately, the onstage behavior of the other guests. There’s Ira Glass, host of This American Life (and nobody’s idea of raucous), in a drinking game skit for the “Drunk Show,” where he and a bevy of comics (and Rachel Maddow, who does a cocktail hour interview with John Hodgman) escalate to various stages of shit-faced. Glass later described his “growth experience” takeaway from that show as the two things he’d never done before or would again: black out onstage or do stand-up.

Mirman’s comedy is so full of escapist hilarity that when we learn halfway through the film that Katie Westfall-Tharp, his wife and the mother of his toddler son, has an advanced cancer, we think, “Uh-oh, the silly’s gonna curdle like a botched mayonnaise.” But in the same way that a Colbert Late Show monologue stanches the pain of what we’ve mucked through all day on MSNBC, Mirman’s buoyant humor and bonhomie remarkably keep both Katie and the film on a positive, hopeful trajectory.

Austin Chronicle: What would you say was your biggest challenge in making this doc?

Julie Smith Clem: As a director, it was being so personally and emotionally connected to Eugene and Katie, and trying to weave that serious personal story into a documentary about a silly comedy festival. Also, it was very hard finding chargers for the old digital cameras that had all the old photos and video, going back.

AC: Talk about your decision to include your wife’s illness in a film about your comedy festival.

Eugene Mirman: This film is the most personal thing I’ve ever been a part of, so the territory is really new for me. For a very long time, I’d thought about doing stand-up or talking about it. I’m glad that there’s sort of a record of an era with the good and the sad. Humor is a part of coping and dealing with hardship. I hope this will make people feel less alone. A combo of humor and chemo are the best medicines. But don’t try one without the other.

It Started as a Joke