Lynn Shelton and Marc Maron Wield a Sword of Trust

A question of trust in this new comedy 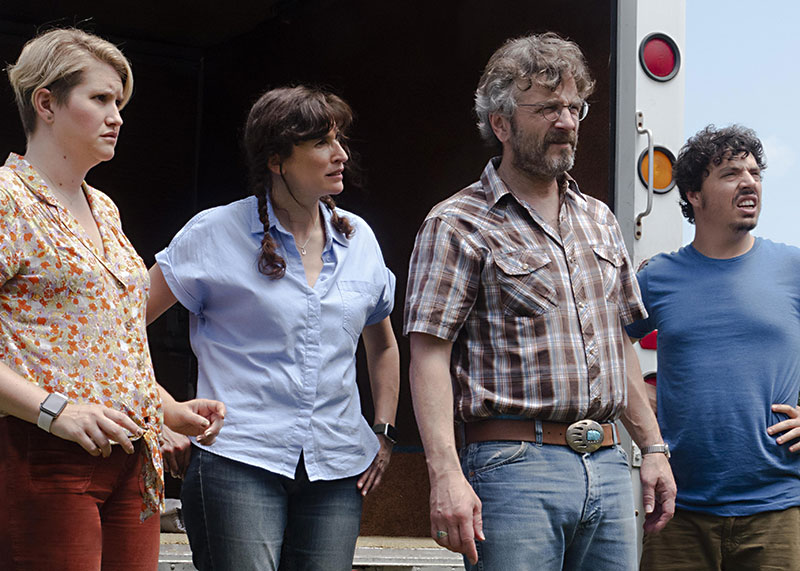 Great directors often have great muses. Scorsese and De Niro. Anderson and Murray. Scorsese and DiCaprio. Now, Lynn Shelton and Marc Maron, whose new comedy Sword of Trust gets its world premiere at SXSW. "I want the world to see what [Maron] is capable of as an actor," Shelton said. "It's sort of like this secret. People need to know – this guy's amazing."

“It’s sort of like this secret. People need to know – this guy’s amazing.” – Lynn Shelton on collaborating with Marc Maron for Sword of Trust

The pair had worked together on projects like Netflix's GLOW, and Shelton, Maron, and co-writer Mike O'Brien began writing a script for a different film. However, the process was too slow-going for Shelton, who was eager to get on set with Maron. He proposed she write something new, and he'd give her two weeks of his time to shoot it. "[Shelton] seems to have a very good handle and understanding of me as a performer," Maron said. "I trust her instincts throughout what I do. She definitely gets the best out of me, that's for sure."

Knowing her previous films such as Laggies and Humpday fall firmly in the dramedy realm, Shelton deliberately set out to make a straight comedy this time around, going for a more screwball, absurdist feel. Sword of Trust follows Mel (Maron), a pawn shop proprietor who meets a couple claiming they own an antique sword that proves the South won the Civil War. With conspiracy theorists willing to pay big bucks for the questionable item, the three (along with Mel's lazy employee/sidekick) go on a wacky road trip to make the sale.

"I can do whatever I want," Shelton said. "I can make my characters go through whatever the hell I want them to go through. I freed myself up to let things go in really unexpected, silly directions."

The film plays with the concept of people creating their own versions of reality to suit their beliefs – a topic Shelton feels is relevant in the current heyday of "alternative facts" and "fake news." "People are mostly good," Shelton said. "It's just that they get a little misled and a little misguided, and I think there is sympathy to be had for that. It's not that everybody's an idiot, it's just that we all have the capacity to be suckers."

Sword of Trust also marks a return to Shelton's improvisational roots. Realizing improv is not a skill all actors have, over the years she's been collecting people who understand and can work in this form, biding her time for the right project. Maron's cranky, world-weary performance grounds the film, serving as an anchor amid the more kooky performances. "There [were] a lot of people with big personalities around me," Maron said. "I wasn't going to be the one talking a lot; I was going to be the one reacting. I just sort of accepted that, and it turned out to be the best choice."

Maron praises Shelton's ability to focus in on the emotional dynamics among the story's bizarre nature, ultimately telling a touching tale about relationships. "It's sweet and uplifting but also a little heartbreaking, but not in a tragic way," Maron said. "At the end of the movie, you really connected to the emotional journeys of all these characters, and that's surprising and kind of beautiful."

Their collaboration extended beyond that of actor and director – Maron also composed the score. Though Shelton originally intended to work with another composer, she kept hearing Maron's guitar-heavy sound while editing, eventually deciding to draw solely from his library of pre-recorded music (save for an original song that closes the film). "I could not be more excited about this end credits song," Shelton said. "It's freaking awesome, so I hope people stay through the credits so they hear the whole thing."