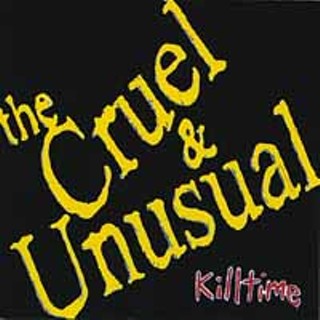 Killtime (Mortville) Since so much of a punk album's appeal lies in how well a band harnesses its live energy, it will come as good news to Austin true believers that the Cruel & Unusual's latest is greasier than a slice of the Parlor's finest. Never less than balls-out, the local trio treats the concept of ballads the same way they would a tour-underwriting proposal from Starbucks. Nevertheless, the C&U displays an admirable range within their chosen milieu, shoehorning the Cramps-like sneer of "Not Right" alongside the psychobilly "Irreparable" and the straight-ahead two-chords-and-a-middle-finger of "Only Life," "Consolation," and well, pretty much everything else. Lyrically, Eric Unusual has some issues, and his rapid-fire delivery vents more psychological baggage in 37 minutes than an entire afternoon of Montel Williams. Not all of it is even his: "William Foster" is a spot-on sketch of the had-it-up-to-here hero of the 1992 film Falling Down -- achingly relevant in these quick-to-anger times -- and a swaggering remake of the Beatles' "Run for Your Life" has a leering menace the Fab Four could never muster. The old line in punk rock is they just don't make 'em like they used to, but in this case, they do. Anyone nostalgic for, or in the middle of, those days of plastic cups, sticky floors, hurt feelings, and missing teeth should head to Sound Exchange pronto.