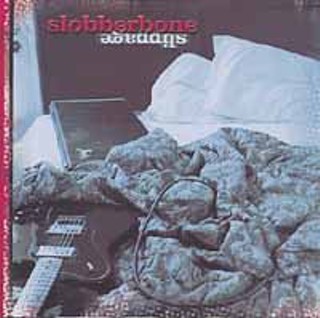 Slippage (New West) At their peak, the band that spawned the whole "alt.country" tag, Uncle Tupelo, spewed forth blazing punk rock from an honest, countrified perspective. Unfortunately, the rock side got mostly buried in the later waves of bands lumped under that tenuous flag. Well, the rock & roll soul is back, courtesy of Slobberbone, the ragtag Denton crew whose sheer power has for years held them a long cut above the alt.country bands they're often lumped with. Slippage is their fourth album, and it finds them back in touch with their beginnings as the hardest-drivin' cowpunk band in the land. Opener "Springfield, IL." absolutely sizzles as frontman Brent Best does his best Jay Farrar; in terms of utter conviction, you sense he's always one drink away from mauling your lawn chairs and passing out on your porch. "Write Me Off" finds Slobberbone in maximum overdrive, at their most angry, rowdy, and ragged, hearkening back to the sour-mash octane of early gem "Whiskey Glass Eye." Slippage is a bipolar album in that nearly every song is depressingly sad or red-faced bitter, yet all are filled with a rare, down-home grit and open-wound honesty. Where their previous Everything You Thought Was Right Was Wrong Today found the band at their most ornate, with lots of fiddle, mandolin, and more, the more accessible Slippage is essentially just four guys onstage in a bar, doing what they do best, whether it's mowing you down with their raw power or searing your gut with drink-the-pain-away ballads.