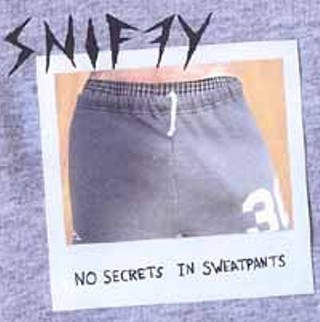 No Secrets in Sweatpants (Austin Music Community) This power trio teaming of local guitar anti-hero Jimmy Bradshaw, bass vixen Rebekah Whitehurst, and all-meat drummer Gene Paul Loncon earns its odoriferous moniker with a rank, seeds-'n'-stems-strewn carpet mash of gutter punk and flash-pot metal. Like most of the growing Bradshaw canon (Unicorn Magic, Squat Thrust, Voltage, etc.), Sniffy stumbles about the gray area between revering and ridiculing Big Dumb Rock like a skinny teen drunk on Boone's Farm and Mickey's bigmouths. Bradshaw's brain-curdling guitar solos and vocal cord-shredding screams would've made many Austin City Limits Festival attendees drop their collective turkey legs in horror, yet Sniffy still manages to sound unique and catchy beneath the fuzz on Bradshaw anthems like "Underwear" and "Bugs." Bradshaw's frazzled ruminations on undergarments and insects pique your interest in the life of the artist just enough; any more would be way too much information. For her part, Whitehurst counters Bradshaw with serene detachment on the oddly enthralling "Kuro Neko." The closest Sniffy comes to a pop sensibility is "Don't Worry," an alterna-leaning Bradshaw/Whitehurst duet that could've been used in an X-treme Doritos commercial circa 1994. Ideally, No Secrets in Sweatpants is best experienced with all aspirations toward sensibility at least temporarily incapacitated by one too many dollar-tallboys.