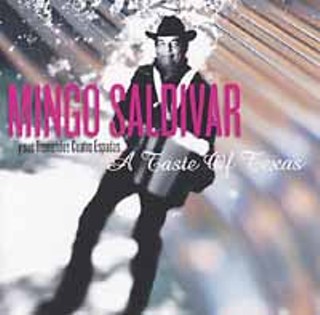 A Taste of Texas (Rounder) Flaco Jimenez often gets tabbed as conjunto's ambassador to the English-speaking (and non-Texan) world, but really, his buddy Mingo Saldivar is much more qualified for the role. Saldivar, just like Jimenez, uses gimmicks to pull the unlearned into his world, but unlike the more famous Texas Tornado -- whose Partners album featured Jimenez's accordion backing non-conjunto songs by the likes of David Crosby and Dwight Yoakam -- Saldivar and his squeezebox take classic country and completely re-work it into conjunto. He got some attention a decade ago for his version of "Ring of Fire," and on this album, he riffs on "Folsom Prison Blues" and "Blue Moon of Kentucky." While these little tricks annoy purists like me, more power to him if he educates more gringos about this wonderful, uniquely Texan blend of Mexican and German polka music. Once pulled in, they can hear the driving bajo sexto and accordion that fills dance floors throughout South Texas. I confess that Saldivar isn't my favorite practitioner -- he's never blown me away like Flaco's brother Santiago (or for that matter, their father Santiago Sr.), or the innovative, late Valerio Longoria -- but it's more than sturdy work that gets the job done. He does impress with "Old Chicano," an affecting ode to the hard-working field hands that put food on our tables for near-slave wages; the tale of a worker busting his hump, "Hoping your children would have a better life," ought to be adopted as an anthem for the United Farm Workers.