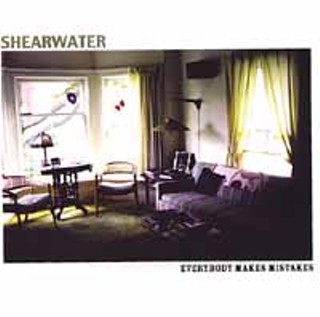 Everybody Makes Mistakes (Misra) With their second release, Everybody Makes Mistakes, Austin's Shearwater has developed from a moonlighting gig/too-sad-song-outlet for Will Robinson Sheff of Okkervil River (a frequent Chronicle contributor) and Jonathan Meiburg of Walking Spanish into a four-piece band producing songs as disturbingly gorgeous and fully fleshed as anything coming from their considerable primary outfits. These are delicately played, deeply felt pop songs wearing the dark cloak of folk without succumbing to either genre's trappings, remaining uniquely, horribly depressingly individual. Thor Harris on drums and vibraphone and Kim Burke on upright bass, while not adding volume, extend Shearwater's considerable depth, as does the sparing use of pump organ and viola. Everybody Makes Mistakes has the feel of a song cycle dealing with human frailty and the messier side of living. That said, while songs like "Mistakes" and "All the Black Days 1" acknowledge the capacity for weakness, they don't dwell on it, the lyrics hinting at rising will and the music swelling to life. Songs are spacious and simply played, single notes held until they give out, arrangements left uncluttered by tricks of any kind. When a violin wavers its way into the mix, though just for a slow note or two, you feel it. Deeply. When the vibraphone resounds, however briefly, it makes all the difference in the world. Everybody Makes Mistakes is not an album you play for a gathering of friends, rather for afterward, when everyone's gone, to enjoy the sweet, sad loneliness that descends like the dimming of the day. (Shearwater's CD release is Thursday, Oct. 10, at Mercury.)