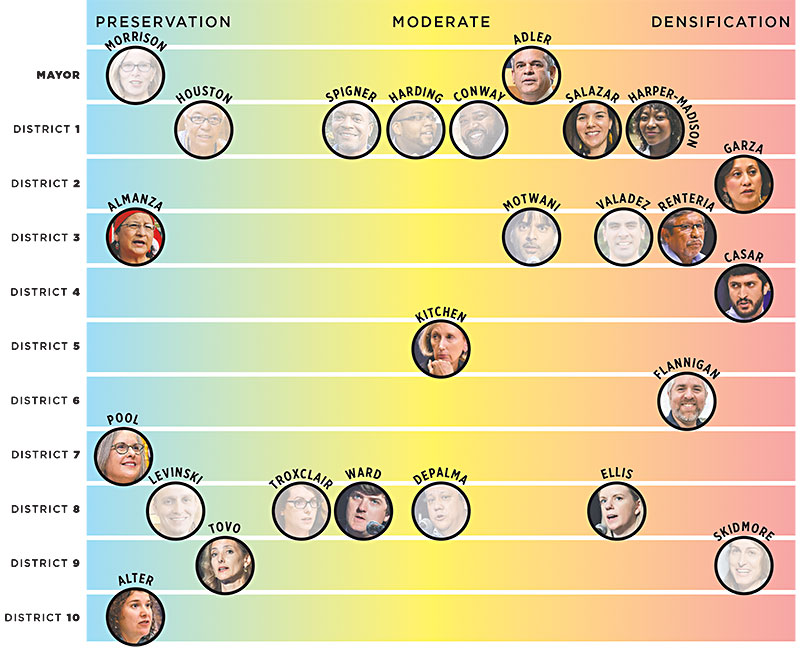 Mayor Steve Adler will be back, and so will Mayor Pro Tem/District 9 Council Member Kathie Tovo, and when the three run-off elections shake out (election's Dec. 11, early voting Nov. 29-Dec. 7), we'll have a better read on the next dais. It's possible that the body will continue with an even land use split – four by four, with three relative moderates in between. But that's not likely; it would require a wild turn of events for that equation to remain in place.

Though there was no candidate in the District 1 race who runs so adamantly in lockstep with preservationists as outgoing CM Ora Houston, a Mariana Salazar/Natasha Harper-Madison run-off means that the Eastside district's representation will come from the other end of the land use spectrum; while Harper-Madison has the unapologetic support of the Real Estate Council of Austin, Salazar is also popular among many in the urbanist community. Score one for the densification alliance already represented by Delia Garza, Jimmy Flan­nigan, and Greg Casar.

They'll hold another if Pio Renteria wins his D3 run-off against his sister Susana Almanza – a likely outcome, considering that Renteria won the first Battle of the Bloodlines (a 20-point run-off victory in 2014) and that Almanza only took home 21% of Tuesday's vote despite being ideologically disparate from every other candidate in this race.

And in D8, where Bobby Levinski's defeat yanks the most outspoken land use candidate out of contention, run-off candidates Frank Ward and Paige Ellis could sway the body in either direction (preservation to densification, respectively) depending on who emerges – though Ward likely wouldn't take things too far in the preservationists' direction should he win, following in the tradition of departing Ellen Troxclair.

Presuming Renteria and Ellis win, densifiers would be looking at a six-three majority, with Adler and Ann Kitchen (who technically won on Tuesday, though she ran unopposed) moderating in the middle. Give D3 to Almanza and D8 to Ellis and you've got a five-four-two type split. It'd be closer to the current four-four-three if Ward beats Ellis and Almanza beats her brother, but that seems unlikely; we're looking at a densifiCouncil so long as Renteria wins.

There's no sense in spilling more ink on the D3 run-off; as Sarah Marloff writes in "Take Me to Your Run-Off," it's déjà vu all over again, with many of the same dynamics (and sibling vitriol) in play. But the other run-offs are interesting. In both, an expected candidate – Harper-Madison in D1, Ward in D8 – finds themselves trailing against someone who city watchers (and our own Editorial Board) did not think would make it past Nov. 6. Yet while Salazar and Ellis both find themselves in run-offs in much the same way, their races will be anything but similar.

Ellis, one of three liberals in a four-horse race with GOP lackey Ward, effectively scrounged for just enough of the voting share against Levinski and Rich DePalma to get through, so now she hopes to pick up the votes that on Tuesday went to the two losing candidates. (Levinski and DePalma mostly ran against each other rather than trying to take down Ellis.) That strategy will presumably be much harder for Salazar – a native of Venezuela, running in what was drawn to be an African-American opportunity district, whose run-off opponent is black and quite openly poised to campaign on the necessity of black representation in the district, and who stands to pick up supporters of the three other African-American candidates in the race (including the establishment favorite, Vincent Harding). But we overlooked Salazar in the general, so what do we know now? Voters will settle all this on Tuesday, Dec. 11.