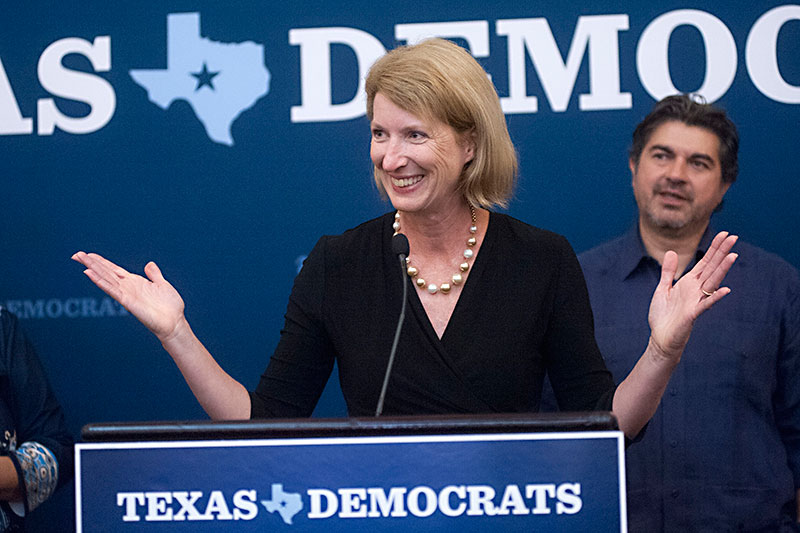 The sailing wasn't so smooth for Ken Paxton; the indicted (and confessed!) felon held on to the Attorney General's office by less than four points, losing former GOP stronghold counties including Williamson, Hays, and Fort Bend to Austin attorney and professor Justin Nelson. Right-wing demagogue Dan Patrick, who won by nearly 20 points in 2014, and Islamaphobic internet troll Sid Miller survived only slightly less tight races for lieutenant governor (against Mike Collier) and agriculture commissioner (against Kim Olson). The Dems in these races ran aggressive campaigns calling out the incumbents for their obvious bigotry, wastefulness, hypocrisy, and downright criminality. While it wasn't quite the blue wave many had desired, there was a damn strong tide that threatened the status quo, making the top of the Texas ticket competitive after 20 years of routine Republican dominance.

One happy surprise of the evening for local Democrats came in House District 47, where real estate agent Vikki Goodwin unseated incumbent Republican Paul Workman, who has held the seat since 2011, and turned the Travis County delegation completely blue. The anti-Austin (read: anti-progressive values) Workman had vowed to repeal local ordinances, including paid sick leave, when the session starts. Over the phone, Goodwin, uninterested in her predecessor's affinity for Austin-bashing, tells us she's ready to get to work on school finance solutions, transportation fixes, and pushing to expand Medicaid. She partly attributes her win to Beto fever. "All of the organizing the Beto campaign did had a significant impact on my race," said Goodwin. "There's a lot of enthusiasm for change in my district."

“All of the organizing the Beto campaign did had a significant impact on my race. There’s a lot of enthusiasm for change in my district.” – Vikki Goodwin

Meanwhile, Reps. Donna Howard, Celia Israel, Eddie Rodriguez (all of whom ran unopposed) and Gina Hinojosa (who had token opposition) welcome Sheryl Cole to the Lege after Austin's former mayor pro tem easily beat GOPer Gabriel Nila and Libertarian Kevin Ludlow (both repeat contenders for the HD-46 seat). Cole, who's been campaigning for the seat for two solid years, will replace longtime incumbent Dawnna Dukes, who saw her 24-year career end in the March primary.

Goodwin was one of 12 Democratic pickups in the House, the biggest shift in the lower chamber's composition since the 2010 GOP blowout. Many of those pickups came from North Texas – including Julie Johnson's win over Freedom Caucus member Matt Rinaldi, who infamously called ICE on protesters on the House floor. But in addition to Workman, Dems flipped three Central Texas suburban seats, with James Talarico replacing retiring Round Rock Rep. Larry Gonzales, John Bucy unseating (on his second attempt) Tony Dale of Cedar Park, and Erin Zwiener taking the seat vacated by Dripping Springs' Jason Isaac for his unsuccessful congressional bid. That means Democrats have a little more leverage this session; Republicans now hold an 83-67 advantage, and Dems could be instrumental in forming the 76-vote coalition needed to win the upcoming open speaker race.

In the upper chamber, while there was no seismic shift, Dems did slightly better than expected with a couple of notable North Texas upsets. While Steve Kling couldn't quite do away with shrieking wingnut Donna Campbell of New Braunfels (whose district reaches into Austin), Democrats kicked out tea party holdover Sens. Konni Burton of Colleyville (for the seat once held by Wendy Davis) and Don Huffines of Dallas. Good riddance to both; they'll be replaced by Beverly Powell and Nathan Johnson. Despite sexual harassment allegations, Sen. Charles Schwertner of George­town beat Dem challenger Meg Walsh in the 12-county seat stretching east from Wilco to Bryan and Huntsville. And with that being enough to maintain the three-fifths GOP supermajority engineered by right-wing ringmaster Dan Patrick (and sadly maintained by the Democrats' face-plant in the September special election to replace the felonious Carlos Uresti), the state Senate will continue to be led into unproductive culture wars.