Anderson, Ashy, and a run-off at AISD 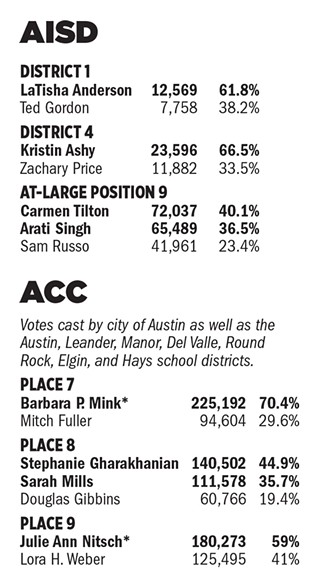 Three new faces will join the Austin Independent School District school board after a night that saw one surprising outcome, a blowout, and a race that will go to a run-off. In District 1, the committed but abrasive champion of Eastside schools, Ted Gordon, was unseated by newcomer LaTisha Anderson. Before polls closed, Gordon's advisors expected a quick victory, but the opposite was true – when early vote totals were posted, Anderson had a 20-point lead and never lost it.

Anderson and Gordon, the only AISD incumbent on the ballot, agreed on what the Eastside schools need: more funding, better teachers, and more attention from district administrators. But as a working mother with a child attending AISD schools, Anderson aims to bring a more on-the-ground perspective to the board's East-West political battles. Reached at her home Tuesday night, Anderson said she was "a little surprised at the results," but felt voters identified with the personal challenges she's had working with the district. "I just told my story and people listened."

In Northwest Austin's District 4, Kristin Ashy trounced 20-year-old Zachary Price by 33 points. The suburban district opted for Ashy, who has notable experience as a PTA president and member of the district's Facilities and Bond Planning Advisory Committee. Ashy watched the returns with a small group of friends, and Wednesday morning said she was "overwhelmed and humbled" by the support she received. "Voters were eager to have someone who knows the ins and outs of the district," she said. "Someone who has spent the last 10 years learning how the district works." Price, who touted his personal perspective as a quite recent AISD graduate, was glad he could start a conversation at the district level about the mental health issues and threat of sexual assault experienced by AISD students. "Before I ran, candidates weren't talking about these issues," he said.

Arati Singh and Carmen Tilton will head to a December run-off for the District 9 At-Large seat. Tilton finished with about 6,500 more votes, but both candidates expressed optimism about their chances on Dec. 11. Wednesday morning, Singh said, "Somebody with a name like 'Arati Singh' getting over 65,000 votes in a citywide election is remarkable." She's confident voters will value her experience as a former educator and PTA president, which will enable her to "hit the ground running" if elected. On election night, Tilton said she was "cautiously optimistic" about her chances and encouraged by the support she saw when visiting polling places. On Wed­nes­day, she noted that her campaign had less cash to spend, but still garnered the most votes – a sign, she said, that her support would last into December. "I am humbled by the 72,000 Austin voters who helped our grassroots campaign," she said. "Our children are our future, and their education should not be political – it should be a priority."

Over in the Austin Community College races, incumbents Barbara Mink and Julie Ann Nitsch defeated their opponents soundly. In the open-seat Place 8 race, Stephanie Gharakhanian nearly avoided a run-off, but will face off against Sarah Mills in December. In a disappointment to ACC's Board of Trustees, Pflugerville ISD voters rejected a proposition that would bring all of the school district into the ACC taxing district – which could have helped grow the college's enrollment.