It's a whole new election, y'all! While turnout for the Dec. 11 run-off will likely be a small swell compared to the vote tsunami of Nov. 6, we still have important races to resolve, and it's still a simple task to do your civic duty. The run-off has given our Editorial Board reason to reconvene and reflect on the recommendations which follow. For more information, visit our Elections page at austinchronicle.com/elections.

Voting Info: Early voting starts Thurs­day, Nov. 29. At press time, the County Clerk does not yet have a list of polling places; it'll be posted at www.traviscountyelections.org.

Voters scorned establishment politics by pitting relative outsiders Natasha Harper-Madison and Mariana Salazar against each other in the District 1 run-off. We stick by Harper-Madison, who won our dual endorsement along with Vincent Harding in the first go-round. As we noted before, the native East Austinite's knack for coalition-building, demonstrated by her work with everyone from merchants to tenants, and commitment to tackling tough issues in a collaborative manner, make her the best person to advocate for District 1 going forward. We admire Salazar's focus on broader community engagement, and applaud the impressive ground game her campaign of volunteers was able to establish. Her expertise in human and social services, gathered during her time at the Ending Community Homeless­ness Coali­tion, would undoubtedly serve the dais well, but we believe she lacks the necessary grasp of other pressing city issues. As an advocate for the Eastside, Harper-Madison has engaged on a wide variety of issues that cross the dais – from small-business support to affordable housing to predatory lending to code enforcement – which we believe makes her the better choice here.

Renteria retains our endorsement; having received (again) just under 50% in the general, the District 3 incumbent (again) faces his sister, PODER director Susana Almanza, in a run-off where he remains the favorite. Though a quieter voice on the dais, Renteria is a team player who's spent the past four years getting several affordable housing projects in D3 off the ground. We look forward to him building on those accomplishments and taking a more assertive role as an affordability advocate in his second term.

It may come as little surprise that we chose progressive Democrat Paige Ellis over conservative Republican Frank Ward in this contest, but for the record we grilled each candidate on city policy before we made a final decision. We appreciate Ward's seemingly moderate politics – or perhaps our bar is low in comparison to the likes of Dan Pat­rick. The public relations specialist and Parks board member cares more about fiscal issues than attacking the LGBTQ community: Ward touts his vocal opposition to last session's anti-trans bathroom bill. We also commend his focus on livability and affordability in Southwest Austin, and his call to help those who are struggling, but we fundamentally disagree with his solutions to those glaring problems. The Ellen Troxclair-endorsed Ward wants a hard freeze on property taxes, opposes paid sick leave, aims to trim the budget as much as possible, and supports the (defeated) Proposition K's third-party efficiency audit, designed to arm conservative groups with ammunition to eliminate or privatize city services.

While we endorsed Bobby Levinski in the general election, we've seen Ellis, a relative political novice, grow as a candidate, garnering support from both Levinski and Rich DePalma. Ellis will prioritize protecting the many environmentally sensitive areas in the district, supported the successful affordable housing bond, and is a proponent of greater density along transit corridors, multifamily housing, and solutions like duplexes and garden homes. She knocks Troxclair's obsession with ideological pet projects at the expense of such basic needs as stop signs, crosswalks, and trash services in park spaces. We support Ellis' vision for the district and look forward to her tenure on the dais.

We picked Tilton in the first round of what was then a three-way race, and we're sticking with that now as she goes head-to-head in a surprisingly expensive campaign with Arati Singh. Both candidates would be excellent members of the school board, but we feel Tilton's experience working with state government and at the Legislature gives her the edge.

Gharakhanian, our endorsee in the first round, finished with 49% of the vote to lead the field on Nov. 6, and now faces Sarah Mills one-on-one. Both candidates have admirable experience with and commitment to social and economic justice (Gharakhanian with the Workers Defense Project, Mills at the Austin Tenants Council); we feel Ghara­khanian has a clear vision of how the region can use its community college locations and resources as tools for needed change. 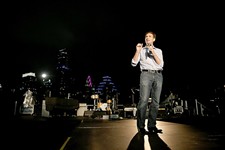 Election Coverage: Election Miscellany
Here's to some losers and assholes