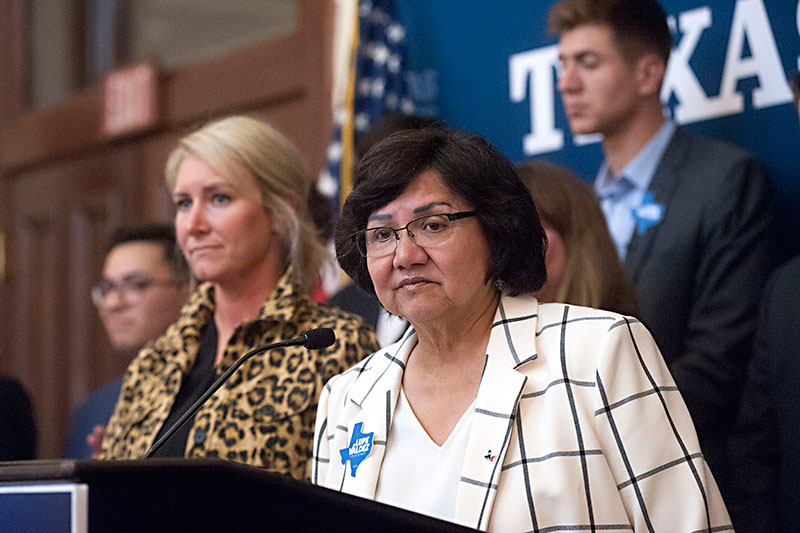 "Huh, I thought there would be more tears." So said one late arrival at the local and state Democrats' traditional election-night gathering at the Driskill Hotel. This was after the U.S. Senate race had been called for Ted Cruz, and just as Lupe Valdez was finishing her concession speech upon her widely anticipated defeat by incumbent Gov. Greg Abbott. "The 2020 campaigns start tomorrow," she closed, to cheers from at least some of the crowd, those who weren't transfixed by MSNBC on all available screens.

Valdez's valedictory, after a night that turned out the way most of the Driskill crowd expected deep down inside, may sound like a threat as much as a promise. But the 2020 campaigns, at all levels of government in all jurisdictions, started a while ago. Beto O'Rourke went from sex god to punch line to 2020 hopeful in the span of six weeks, among a Beltway cadre that continues to fumble and stumble whenever it turns its gaze on Texas. We still have to look at Cruz's bloated, dead, alien fish face for six more years, even as the same punditocracy demands that Beto at least pretend to run for president in an emerging Dem field that is lacking in non-geriatric white men. (You know that's the thinking here, right?) But the "Pride of El Paso" got 48.2%, better than any Dem statewide since the John Sharp and Paul Hobby heartbreakers of 1998, the same year O'Rourke got his now-notorious DWI. He had ample reason to be "so fucking proud" of his supporters on national television.

For Beto's record-setting fundraising and mobilization fueled the ground game that did what the hapless and/or hamstrung Texas Democratic Party could not, and even the roomful of losers at the Driskill knew it, hence the lack of grave distress. Even in the congressional, legislative, and urban-county districts the Dems didn't win, the party is now competitive; any GOP incumbent in the Austin, Dallas, or Houston suburbs is more lucky than good (for example, Plano [!] Rep. Matt Shaheen won by 378 votes). Eternally endangered U.S. Rep. Will Hurd is up by 700 votes as of this writing. Con­gress­-critters who didn't even have Dem opponents in 2016 or 2014 found themselves running for their lives; if the survivors make it through 2020, they'll be even more endangered in 2022 when, despite the GOP's best efforts, the Texas map will inevitably include more blue districts.

That's the real measure of hope underneath Valdez's otherwise anodyne shout-out; the Texas Dems have been leaving their blood, sweat, and tears on the field, and even without Betomania will have to work harder than normal to find ways to fuck it all up. Yes, this midterm may be a fluke – the highest Texas turnout for a gubernatorial cycle since 1994, the last time the Dems won statewide, which is not a coincidence. But that's still only 51%, and it's not obvious that the Dems hit their ceiling in the suburbs and exurbs, or will be less motivated to keep purpling them up in 2020. And that's not even touching on the eternal scut work (and money, like Beto-level money) needed to unlock the growing youth and Latino vote.

In Texas, as nationally, it's become obvious that the path to a better, bluer world runs from the bottom up; late, legendary Dem Speaker Tip O'Neill's truism that "all politics is local" is certainly true, and only true, for his team right now. Dems did badly in the Senate, but turned years' worth of waves of base excitement – for Obama, for Clinton, for Sanders, for Howard Dean, for Occupy, for DSA, for whatever – into actual members of Congress, governors, legislators, and ballot measures that reflect the diversity that strengthens the party. As of this writing, Dems have flipped 31 House seats and only lost three; took seven governorships and lost none; flipped legislative chambers in five states; and saw progressive priorities, from Medicaid expansion to marijuana legalization to nonpartisan redistricting to felon re-enfranchisement, validated by voters in state after state.

Meanwhile, Republicans would not, and now cannot, find a way to avoid the poisoned chalice of Trumpism; does anyone expect the Donald to become more popular with young voters, suburban women, or people of color? With an already booming economy and low unemployment, what would help the GOP take back the House? Other than éminence grise Mitt Romney – the Sam Houston of our age – the few remaining "sane" Republicans have been completely shut out of the national conversation, so the party is now hostage to the whims of our petulant president, who has already begun to purge those who have failed to kiss his ass. He may indeed get re-elected in 2020, but Dems had a really good night in Michigan, Wisconsin, and Penn­syl­vania; how does he win those states again?

Given the crazy tenor of these times, bringing the blue team closer to parity is itself a victory we shouldn't be too quick to disparage. Even if we still have some time to wait before Ted Cruz returns to his home planet.

Beto's On His Way: "We've Got To Show Up, And That Means Coming to the Capitol on Sunday"
Weekend rally wraps up "Texas Drive for Democracy" tour