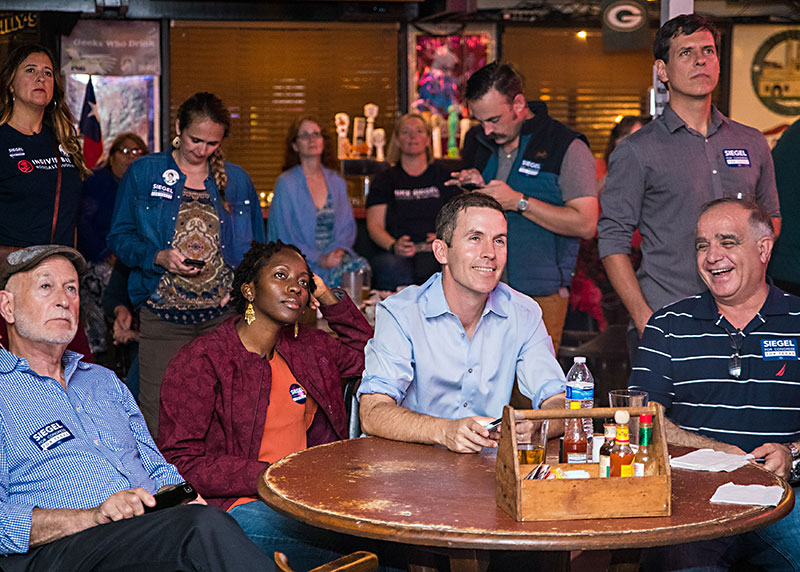 "You get the democracy you work for."

That was Joseph Kopser after midnight at the Native, delivering his "red" speech (conceding defeat) in the TX-21 congressional race. Like most of Austin's* Democratic congressional candidates, Kopser faced an uphill fight against Republican Chip Roy, in one of five aggressively gerrymandered Texas districts designed to easily elect Repub­lic­ans. The 21st District, currently held by the retiring Lamar Smith (after 30 years), stretches from western Travis County, out through the Hill Country, into San Antonio, and had been a "20% district" for Republicans.

"We made a huge step in a positive direction," said Kopser. "We moved it from a 20% district to a 3% district." While he had hoped to be reading his "green" speech, declaring victory, his talk, and the room full of supporters, were much more upbeat than the occasion implied. "We've changed the conversation," he told them. "We have much more in common than that which divides us."

“We have a change going forward. ... The future is a cloudless sky.” – Joseph Kopser

As late as 10pm Tuesday night, Mike Siegel, challenging incumbent Michael McCaul in TX-10, thought the race was too close to call – "perhaps until morning." But within the hour it was decided, and Siegel lost, 51-47%. In a statement, he noted that McCaul's previous margins ran from a low of 11% to a high of 63%. "For the first time since the Texas 10th was gerrymandered 15 years ago," Siegel said, "last night the district was in play."

So it went across the Austin* districts. In TX-17, Rick Ken­nedy lost to Bill Flores (who barely campaigned) 57-41%. But that was the worst of the five-district group where each crosses Travis, but is anchored far away. In TX-25, the indefatigable Julie Oliver forced GOP incumbent Roger Williams to campaign, losing 54-45%. The valiant MJ Hegar, a decorated combat veteran and activist taking on TX-31 incumbent John Carter – who only deigned to campaign when it was clear Hegar had a serious shot – came closer, at 51-48%. (TX-31, in Williamson and Bell County, is partly within Austin city limits.*)

Only longtime Democratic incumbent Lloyd Doggett, the sole "beneficiary" of Republican redistricting in that his elongated, Austin-to-San Antonio TX-35 is packed with Democrats carved out of other areas, won easily over little-known challenger David Smalling, 71-26%.

In the context of broader Democratic victories – specifically, the takeover of the U.S. House, in which Doggett and his colleagues in the Progressive Caucus have a new lease on life and a direct check on the Trump administration, the important steps made in Texas remain a good omen. Kopser told supporters: "We have a change going forward. ... The future is a cloudless sky."