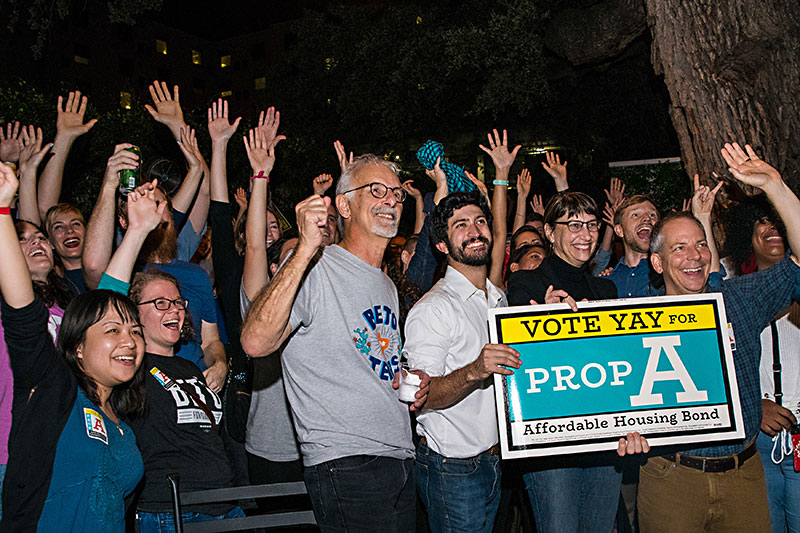 Early voting numbers all but decided the fate of the city's 11 ballot propositions. Propo­si­tion A, the $250 million affordable housing bond (the largest in city history), passed easily with 73% of the vote – a greater margin than predicted, according to Foundation Communities Executive Director Walter Moreau, a major supporter of the Keep Austin Affordable campaign that worked hard on the bond.

KAA's watch party Downtown at Pelóns was joyous, filled with many supporters: LifeWorks Executive Director Susan McDowell, Habitat for Humanity's Greg Anderson, and District 4 Council Member Greg Casar. Shortly after the first numbers were called, Casar and Moreau thanked campaign volunteers, voters, service providers, Mayor Steve Adler, and City Council for the bond's overwhelming support. Casar added that many worried a $250 million bond was "too steep of a hill to climb," but by an "overwhelming margin" Austin showed "we are sticking with our neighbors and we are not going to give up on them." He closed by saying he's never felt more inspired to fight for affordable housing. Tuesday night, he said, Austin proved "we don't want to build walls, we want to build houses."

Continuing down the ballot, the vast majority of voters decided a $5 per month tax bump was more than worth it to support our libraries and cultural centers (Prop B), parks (C), open space and flood mitigation (D), the Dove Springs Health Center (E), public safety (F), and trans­por­ta­tion infrastructure (G) – approving the entire $925 million bond package.

Less significant, but worth noting: Voters passed Prop H, which clarifies City Council's right to remove appointed Planning Commission members from service prior to the end of their terms, and Prop I, making grammatical edits to the City Charter.

Last up were the two ballot initiatives, propositions J and K, both of which appeared dead after early voting. Despite ethics complaints and a big campaign in its support, 52% of voters rejected Prop J, the ballot initiative to make comprehensive zoning rewrites subject to popular vote and waiting period. Prop K saw a more substantial defeat, with 58% of Austinites voting against the GOP-funded effort to conduct an independent audit of the city. Between hiding those funders, campaigning against local control, and concerns over whether the measure was even legal under the City Charter, it's hard to tell what swayed voters, but we're happy to say that Trojan horse has been put to pasture.