It's football game day – a Saturday – and the scene is typical for a sports bar. Patrons lift beers to their lips and chat with friends missed during the off-season, and a few show their spirit and reverence for tradition by belting out a fight song. They vibrate with excitement, eyes glued to big-screen TVs as they anticipate the new season kicking off.

Yet, it's not typical at all. These aren't Longhorns fans. They aren't singing "The Eyes of Texas" or any other school song. And it isn't a sunny afternoon – the sun's barely above the horizon. Most odd of all: They're watching the wrong kind of football ... at least for Americans.

"Oh when the Spurs

Oh when the Spurs go marching in

I wanna be in that number

When the Spurs go marching in"

The season kicking off is soccer – the very first match of the 38-game English Premier League schedule that will last until May. This opening battle pits Manchester United (a team even the soccer-ignorant have heard of) against Tottenham Hotspur, aka "Spurs." (It's even the wrong kind of Spurs for Texas.)

The bar is Mister Tramps on Research Boulevard, which since 2012 has been the home base for Austin Spurs, the team's local fan club – or "supporters' club," in English soccer parlance. You may have never heard of this team or even know where Tottenham is (it's a neighborhood in north London), but they do indeed have local fans.

Quite a few, actually. This morning, at least 50 have turned out, and that's just the ones willing to drag themselves out of bed and get to a bar for a 6:45am kickoff. Across town at Fadó, the Austin Reds (Manchester United) are watching the same game and singing their own songs. Later that morning, Everton and Chelsea fans would gather at Haymaker; on Sunday, Arsenal supporters would eat breakfast at the Tavern, and Liverpool lovers would meet at Fadó (if it had been a Saturday they'd have been at Bull McCabe's); and at 2pm the day after that, Manchester City loyalists would populate Haymaker again for some "Monday night football."

In a nation that has long been notorious for its ambivalence or downright hostility toward the world's most popular sport, things have changed.

As I walk into Haymaker early on a Sunday, I'm greeted warmly by Jens Busch, the founder of Austin Blues, the local Chelsea Football Club supporters' group. He looks over my Tottenham jersey and, remembering proper decorum between the two London teams, says, "That's a disgusting shirt."

His tone is a mixture of friendliness and fight. If this were London, it might be only the latter; but on this side of the pond, it's tempered by gratitude at meeting another soccer fan.

Busch has been doing this supporters' club thing longer than most in Austin – but that's to be expected, since he was born in the Netherlands and grew up in London. "Formally, it was the 2002-03 season," Busch says of Austin Blues' founding. "Back in those days, of course, Facebook didn't exist, so basically back then what I would do was, at the Irish bar we would watch at, I would collect email addresses if they had a blue shirt and they were watching the game, and then I'd push emails out to everybody to come join us for the games."

"After that, once we got roots in," he says, "we became known as 'Austin Blues' and were affiliated with an organization called 'Chelsea in America,' which was actually an official supporters' club to Chelsea. And then we broke off on our own shortly after that and we've been independently official with Chelsea for about seven years now.

"We were probably the first organization that really kind of pulled together," Busch says. "The [Manchester] United fans were kind of loosely attached, the Arsenal fans were the same way, but we were really more of a concentric group. And I really wanted to have a supporters' club in order to, first off, promote Chelsea, but also to just interact with other clubs and with friends. It's really grown to something fantastic at this point."

Other historically successful and thus more widely known teams have Austin supporters' club roots almost as far back – the Arsenal club, Austin Gooners (a Cockney-fication of "Gunners," Arsenal's nickname), began in 2006; Austin Reds (Manchester United) in 2007; Liverpool FC Supporters Club of Austin in 2008 (although they didn't become "official" until 2013).

But it speaks to soccer's growth in America that now teams lesser-known on this side of the pond are growing fan bases as well. Austin Spurs, says club president Chuck Hoffman, began "as five guys in a parking lot for the North London Derby (Tottenham's twice-yearly rivalry game against Arsenal) in February 2012. We found more people as 2012 continued. One day we'd have 20 people, then 30 ... it kind of grew exponentially."

MCFC Austin (Manchester City) and AS Roma ATX (a rare supporters' group of an Italian team) followed suit a year later, and just last year EFC ATX (Everton) got organized. There are also, at least in theory, Austin groups for Aston Villa and Fulham, although they don't appear to have reached critical mass yet, and German football fans, especially those of Bayern Munich, have begun coalescing at Mister Tramps.

The size of this phenomenon shouldn't be overstated – the soccer groups are seedlings, still a long way from growing into trees. The groups are new because the interest is new. Like me, many of these early morning bar patrons had a gradually building interest in soccer that crystallized into support of a particular club only recently – and then social media helped them find one another. 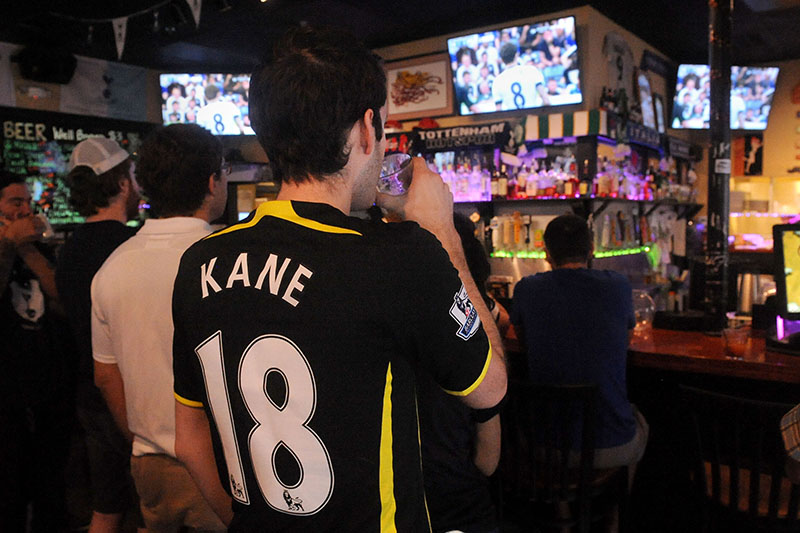 "We started January 2013," says Joey Bacon of MCFC Austin. "I got started by just starting a Twitter account. There are Manchester City clubs all across the U.S., and there's a big one in Dallas, one in Chicago, and I said, 'Why can't we have one here?' I'd go to watch games at Fadó and there would be three or four guys, but I knew there were more City fans here in Austin. So I started just getting people involved, and we have 35 official members now."

Everton supporter Ty Burk tells a similar story, starting with Twitter. "In a city that's not necessarily all about soccer, social media's the best way to find them. A lot of people think they're the only ones until they stumble across the Twitter or Facebook page."

But good Lord, why go to a bar at 9am? Or even worse, earlier than that on Sunday, before the bar can even serve alcohol? Surely these people could be sitting comfortably on their own couch, in bed even, with a cup of coffee and maybe even a better TV?

"My girlfriend doesn't really like me waking up at 6:45 screaming and yelling when [Man City striker Sergio] Agüero scores," laughs Bacon, "so I have to be someplace where it's more welcomed."

"The camaraderie is a huge element of it," agrees Burk.

In fact, that camaraderie even reaches across team lines: Bacon and Burk were sitting side-by-side for this interview. Both the Man City and Everton clubs share Haymaker as home base, and the night before, they did a pub crawl together.

But even Bacon and Burk aren't as bonded as Aaron Davidson and Elizabeth Moore. Aaron and Elizabeth walked into Haymaker together holding hands – Aaron wearing Everton's royal blue, Elizabeth the light blue of Man City. They talked a bit, kissed, and then went to opposite sides of the bar to be with fellow fans of their respective teams.

Both graduates of Texas A&M, Aaron said they chose their teams in 2012. Once Aaron had chosen Everton, Elizabeth said she had to pick a different one just to make it interesting, "I was not going to support the same team as him. That's just not as fun.

"At the same time," she laughs, "I wasn't going to support Liverpool – that's just antagonistic. I believe in the long-term health of our marriage." (Liverpool FC and Everton FC are fierce rivals both residing in the city of Liverpool with stadiums only about half a mile apart.)

For Americans with no geographic or family ties to a team, the reasons for picking a side can be completely random.

It can be a favorite player. I latched on to this guy named Clint Dempsey, who somehow rose from the woods of Nacogdoches to become a star in England. I was impressed that a guy with small-town Texas roots similar to mine could do that, so I followed him first at Fulham, and then Tottenham. During his brief stint with the latter, I discovered Austin Spurs drinking at Mister Tramps – just two miles from my house – and that cinched it. Similarly, Burk picked Everton because of goalkeeper Tim Howard, the American hero of the 2014 World Cup. Hoffman picked Spurs because a friend told him it was the team most like the Jets and Mets, his other favorite teams.

But why a foreign team? We have Major League Soccer (MLS) in the United States, and even a minor league team here, the Austin Aztex. The simple answer is quality – just as foreign baseball fans will follow MLB, or basketball lovers will track the NBA, soccer fans know "the best of the sport is overseas," Burk says.

"The English Premier League is the biggest and most watched soccer league in the world," says Bacon. "The play in the MLS is not as entertaining. It might be as good in five or 10 years."

Fans of Spanish, German, or Italian soccer might argue their leagues are better, but certainly the EPL is the most watched, especially here in the States – NBC's purchase of American rights to the Premier League has been a major fuel to this fire.

"There's a lot better TV coverage," says Miles Gullette of Austin Gooners. "NBC, when they got the Premier League rights, they made every game available either on TV or online."

As Gullette and others pointed out, that's actually better coverage than one can get in England itself. And certainly better than what was available in the States just a few years ago. And now competitors BeIn Sports and Fox are showing more of the Spanish, German, French, and Italian leagues.

Another Sunday .... This time, it's a later game, and the clock approaches noon. NFL fans are drifting into the bar, and they warily watch these strange people – already in the bar, already buzzed, already rowdy – yelling at the strange sport on the TV. A few get it, but most avert their eyes, the way you do when some disheveled guy passes you on the sidewalk, talking to himself.

"We're friends outside the group," says Meghan Duncan, president of Liverpool Supporters of Austin. "We're the loudest and the proudest."

"They're like my family," says Gullette. "And it's growing."

And no matter what, they're still not those folks at Fadó, across the bar from Austin Reds, who were watching Gaelic football – a whole different sport altogether. Now those people are strange.