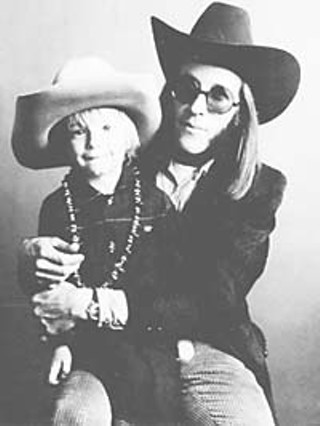 People would freak on us, because we'd hug and kiss on each other in public," says Shawn Sahm of the tight bond he and his brother Shandon shared with their father. "But it was like, "Fuck everybody, we don't care what anyone thinks.' We always wanted the whole world to know." What the "Sons of Sahm" always wanted the whole world to know was that Doug Sahm wasn't just their father, he was also their best friend. In fact, to say the Sahm family was a mutual admiration society is to put it mildly. Once both Sahm brothers decided on careers as professional musicians, few conversations with Doug Sahm didn't include an excited endorsement for Shawn or Shandon's latest projects. In turn, the Sahm brothers say everything they know about music, and life itself, they learned from Doug Sahm.

"Everything stems from him," says Shawn, 34. "When I learned to play guitar, sing or write songs, I learned by watching him. My favorite bands were always bands like the Beatles, Led Zeppelin, or Hendrix, but my dad was always in a whole other category."

From before they could walk or talk, the Sahm brothers were immersed in their father's music -- at Soap Creek and on the road. But Doug Sahm was not an absentee father.

"His songs are like a scrapbook of our childhood," Shawn says. 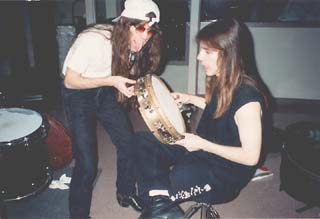 Shawn (l) and Shandon during the recording of Daydreaming at Midnight

As a toddler, Shawn Sahm even managed to crawl his way onto his father's lap for a Rolling Stone cover photo. And Shandon Sahm says he distinctly remembers his father's regular visits to his junior high band class -- where he taught not only his own son, but also guitarist Kyle Ellison (Shandon's partner in both Pariah and the Meat Puppets). Although both Shawn and Shandon Sahm wound up diving headfirst into San Antonio's late-Eighties hard rock scene before they could drink in the bars they played, neither says they ever felt pressured by their father to do anything other than what they wanted.

"I think pop wanted us to be athletes," says Shandon, 30. "He always said how cool it would be to watch his son quarterback in the NFL. But with so many melodies always floating in the air, you couldn't help but absorb it. He was great about nurturing what we wanted and allowing our talents to develop naturally."

Throughout much of the Nineties, Shawn has played extensively alongside his father both live and in the studio. And while the elder Sahm never got the opportunity to record the "family" album he envisioned, the brothers did wind up lending a metallic edge to 1994's critically acclaimed Day Dreaming at Midnight, an album Metallica manager Cliff Burnstein pushed for after hearing a one-off Doug Sahm & Sons contribution to 1990's Roky Erickson tribute record, Where the Pyramid Meets the Eye. Ultimately, the Sahm brothers wound up exposing their father to almost as much music as he'd shown them.

In fact, the Sahm brothers say they were never surprised that their father would occasionally jam with both Pariah and Shawn's band Prezence, or that he'd wind up hanging with Kiss' Gene Simmons and Paul Stanley, Son Volt, or Meat Puppets leader Curt Kirkwood.

"My dad was the kind of guy who could do any kind of music and do it right," says Shawn proudly. "In a gig, we'd do Hank Williams tunes and Roky Erickson tunes and everything in between. And if we hit "Purple Haze,' the amp came up and the solos got faster. It was amazing. He did everything the way it was supposed to be done." 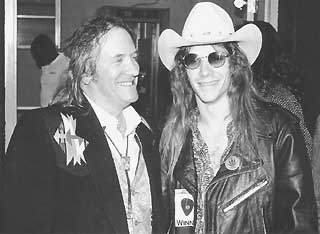 Better yet, Shawn says the view from the bandstand and offstage in the buses and at the hotels gave him access and insight into his father's genius that only a son could fully absorb.

"I loved and respected him as a father. I loved and respected him as a musician," Shawn says. "I also knew him as star that knew when to put on a cowboy hat and dress up to the nines, and I knew him as a regular guy that liked putting on his funky shorts to head out to the barbecue place. I knew him as a baseball freak. I knew and understood every part of his personality. And the music itself allowed us to take it to levels that took it out of the traditional father/son relationship. How many fathers and sons are hitting coffee shops in Amsterdam on tour and making records?"

"I've toured all over the world with my dad and I've been to places where people can't speak any English, but they can say, "Doug Sahm,' "She's About A Mover,' or "Sir Douglas Quintet,'" he says. "I've seen firsthand how many people he's touched."

For his part, Shandon says the thing that amazes him is just how solid and diverse a body of work his father left behind.

"Just look at how many songs and albums there are," he points out. "The public has a lot of stuff to remember him by. It's not like he just made a couple of records and something happened to him. It's just mind-blowing how much ground he covered. And everything he did, he did brilliantly. His life may have been cut short, but I don't know anyone that lived a fuller life."

For both of the Sahm brothers, talking about Doug Sahm's musical legacy comes naturally. And obviously, just days after their father's death, conveying the power of a lifelong friendship between a father and his sons is far more difficult.

"There's so many things I want to say," says Shawn. "But it's hard to put in words. There are eight million stories I'd love for everyone to hear because they're all so great. And a lot of it doesn't have to do with music. My dad was such a major part of my life I can't even describe the emptiness I feel. So much of us were each other."