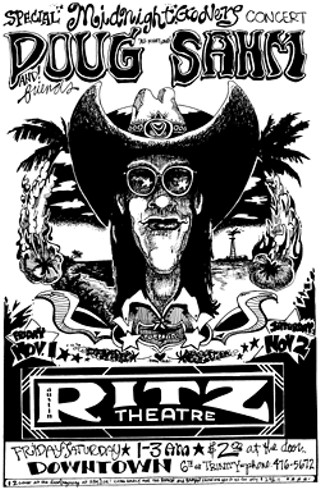 Kerry Awn’s Soap Creek posters and Calendars: The cartoony psychedelia of Kerry Awn's loopy artwork was the perfect image for Soap Creek. Awn's Doug Sahm posters and calendars were drawn from photos, particularly those of Doug as a child performer. To many people, Soap Creek represented the real Austin while the Armadillo was more for tourists; a Doug Sahm gig at Soap Creek virtually guaranteed something or someone would levitate before the night was out.

What is there to say about Doug Sahm? What isn't there to say? The man wrote and embodied the phrase, "You just can't live in Texas if you don't got a lot of soul," was truly one of the Lone Star state's musical giants, fitting for such an ardent fan of the San Francisco baseball club. With deepest apologies to all those we couldn't reach or squeeze in, here's an all-too-brief sampling of the lives he touched.

His favorite thing was Guitar Slim. He'd take a San Antonio band into Louisiana and do Guitar Slim tributes with Earl King and those guys. I'd like to remember the times in the late Sixties and early Seventies when he helped Junior Parker. Whatever Doug did, he was doing it authentically. Singin', too -- he could sing "Sweet Sixteen" by B.B. King, and hit those high notes you didn't think anyone could hit. The other thing was swamp pop. I never met anybody here who knew about swamp pop, except maybe Speedy Sparks, but Doug knew everything and we could talk for hours. Jivin' Gene, T.K. Hulen, Warren Storm, and Tommy McClain -- there's very few people who can talk about that.

Where do you start? He was like a jukebox of all Texas music. He knew every important song of every style of music that came out of Texas. He just lived and breathed it so much; his enthusiasm was just infectious.

Doug always hung out -- at the Continental, Hole in the Wall, Antone's, the Broken Spoke. He wasn't ever above going out to hear other bands play. He was a real music lover, and the nightlife was a part of his life. When it came to being onstage, he was the only one who knew what was going on; nobody else had a clue. Nobody. He understood it all: rock & roll, blues, country. And you felt the spirit when you played with Doug. He could bring the best out of every player he worked with.

He was one of the best musicians I ever knew. He was one of the first and the best ambassadors of Texas music. He and Delbert [McClinton] are all that's left of those original white-guy blues boys. He always showed up when something cool was happening. When I first moved to town in '69 or '70, we showed up at a keg party on 33rd, and Doug was there listening to the Greezy Wheels. When you did a deal with Doug, Doug always got the best end of the deal. Nobody ever got the best of Doug Sahm.

No disrespect intended, but nobody would have had as much to say about Doug as he would himself. He could cover a lifetime in just 10 minutes -- the old days, things he had done, wanted to do, plans for an upcoming show or trip. We have an interesting challenge ahead of us, because we taped a new show with the Texas Tornados that hasn't even aired yet. It's the first time in Austin City Limits history where we taped a show and someone died before it aired. I did an interview backstage with Doug and the guys, where he did most of the talking, of course. Wherever I would see Doug, he was usually talking about his next big plan. The guy could never stand still.

Doug was a friend, a great, lovely character and a lover of all great music, and we're all sad to see him gone. His many visits to the office with his magic briefcase will always be among my sweetest memories.

Brooks Brannon, Hole in the Wall

I loved that guy. Sometimes he'd stop by on his way to a show and be dressed up in his stage outfit looking like a million bucks, and the next time you'd see him he'd be wearing his old San Francisco cap. He loved to put down the Cowboys. There are people that live at half speed, and Doug lived at speed and a half. If there was a hall of fame for Texas characters, he would be in it.

In my opinion, he's the greatest musician I've ever worked with because of his incredible versatility and range. Western swing, straight country, Norteño, even jazz, rock & roll, and blues. He would be just as at home with Joe Scott's orchestra as he would with Bob Wills. Of all the artists I've ever worked with, we have never been out of touch. He introduced Bob Dylan to me -- we had dinner, and they jammed until the wee hours; I got in the way with my bongos. When we did [Doug Sahm & Friends], Bob was there every day -- he'd pick up his guitar and play a couple of rhythm licks or go over to the Wurlitzer. What was special to me was his great big heart and a great deal of empathy reaching out, a lot of love.

I met him in '59, and he was already locally known at the top radio station, KTSA, in San Antonio. I had "Wasted Days" on the charts; he was looking at me as something he wanted to be, and he became my friend. When he offered me a position in the Texas Tornados, I didn't think about it, I just said, "Okay." I never had Doug's phone number; that's the way he wanted it. I had to tell him, "Doug if you can't stop talking, can you slow down?" I thank God a lot for having known a person like Doug Sahm. He was a personality you wouldn't want to miss. The fact that he's not with us no more is really a reason to quit smiling. The last of the hippies has departed. I will always remember Doug as an independent personality -- if we had tickets to fly to New York, he would rent a car and drive. He loved his family tremendously. He left a void that I don't think is going to be filled.

One of the biggest thrills I ever had was recording "Key to My Heart" with him in the studio. He said, "You guys go ahead and do it however you want. When I do my part it'll be perfect." His is one of the most underrated rock voices of all time. All his records have this totally spontaneous feel -- it gave us the confidence to try and sound sloppy. We hadn't played "Key" in maybe three years, and the night before we found out he had died we played it at sound check. I'm not a weird metaphysical person, but that was pretty poignant. So we've been playing it every night since then.

I think the thing that attracted me to Doug was I saw someone I had a lot in common with, and he saw the same thing in me. He didn't start out as a frontman, he started as a sideman. We both had a lot of early successes, we were both child prodigies. I'm losing the only other person I ever met who understood me. We had maybe two blowups in the 25 years I knew him. Here's a guy who to me is a tremendous role model, like an older brother. Neither one of us had any interest in commercial music. Quality music determined what we did.

There'll never be anybody else like Doug -- it's just hard to put into words. He really was full of life, energy, ideas, full of stories. When we do Doug Sahm covers, I always say that if Bob Wills is the king of Texas, Doug Sahm is the crown prince. His music was purely a regional Texas sound, but he took it out to the West Coast and did some freaky things with it. He was a hero of ours. It was always a joy to play with him. What I remember most is sitting around a house or studio, playing Hank Williams songs and him telling stories.

He was consumed with music, just one of those guys who's gonna be a musician even if he starves.

You felt like you could make a joke with him and he would get it. He was a guy that seemed wired and constantly darting off somewhere, kinetic. When he moved back to Texas and saw what was happening in Austin, he was shocked at how cool it was. He was kind of like a troop leader as far as conferring to the locals that they were important nationally. Also, I would say that Sir Doug Sahm was the only Texas rock & roller who was ever knighted.

I stopped at a place called the Barn, and lil' Doug would come in with his mother and father and sit in on steel guitar. He played five instruments, and I thought, "Well, this'll be good to make a record.' [Later], we'd put a big table out there and put four instruments on it and he'd go one by one and play 'em all.