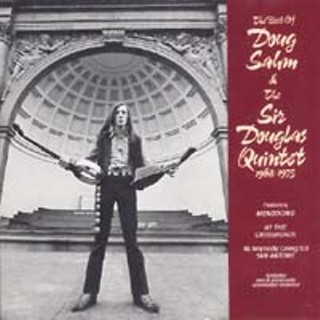 My mother is from San Antonio. My momma. And she couldn't wait to shake off the dust of a small town with small ideas. She met my father at her grandmother's apartment house in San Francisco, a young immigrant making his own escape from small confines. They married in San Antonio, then got the hell out. San Francisco was the place for two left-wing Hispanics. Their only son was born at the University of California at San Francisco hospital.

Almost 30 years later, while visiting my grandmother who had moved to San Antonio when she was 15 (and lived there nearly 70 years), something odd occurred. Walking up the sidewalk to the former Apple Records on San Pedro Ave., there was was something about the way my feet felt on the pavement. It was nothing more than sneaker soles hitting flat on the hot concrete, but somehow it felt ... right. Somehow it felt true. I still can't put a name to it. Sense memory, perhaps.

Thanks to a broken heart, I returned four years later in search of the blues. Stevie Ray Vaughan had just died, and I'd heard of Austin, so crashing with granny until I could find work in Austin seemed like a good plan. In the meantime, I watched a lot of $1 movies, and bought as many CDs as I could afford at Apple Records.

One particular prize was a $5 Rhino Records' promotional CD sampler for the "Atlantic Remasters" series: Ray Charles, Buddy Guy & Junior Wells, Aretha Franklin, Dusty Springfield, Rascals, MC5 ­ even Sonny & Cher. From soul to schlock, it had a serious groove. Especially this one song I'd never heard. "This is a song now about my hometown," announced the singer with a certain boyish sincerity, the lazy, upbeat strum of acoustic guitars falling instep with twin fiddles, and dreamy steel. Then came the vocals ­ double-tracked, it sounded like: "Rain dripping down off brim of my hat, it sure looks cold today." The chorus stopped him cold. "Is anybody goin' to San Antone, or Phoenix, Arizona, any place is alright as long as I can forget I'd ever known her."

I got to see Doug Sahm perform that song several times. More than just the actual song, however, the experience of standing in an Austin club watching Sahm work his magic, was something that never struck me as anything less than real, live history in the making. Squeezing into Antone's during South by Southwest 1995 to see the Sir Douglas Quintet set the house alight; witnessing Sahm nearly upstage his pal Dylan at the Austin Music Hall in 1996; last year's blowout CD release party with the Gourds at Stubb's ­ every time I saw him, I got goosebumps. Every time I saw him, I thought about "(Is Anybody Going to) San Antone," a song that still makes me cry. God bless Doug Sahm. From one son of San Antonio to another.