In the Wake of the Texas Tornado 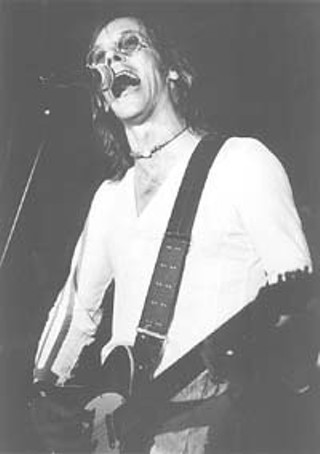 I woke up the morning after Doug Sahm died to NPR's Morning Edition program, and the first words I heard were, "The flags are flying at half mast today in Texas." For all my numbness to finding out about Doug's death the day before, I couldn't help but feel -- way back on some high-up shelf of my soul -- a big-ass smile. And even though I knew they'd lowered the flags for the 12 Texas A&M students who'd perished in a log pile, I also knew that Texas was cosmically honoring its most distinguished musical son. As I started my day, I kept saying to myself over and over, "Damn, they did it for Doug, too. The Lone Star state is saying goodbye to Sir Doug." When Doug moved back to Texas from California in the early Seventies, it felt like a prophecy. Austin was gradually discovering the greatness of its musical community, but what it was lacking was a leader, someone whose talent was so undeniable that the planets could orbit around him. The second Sahm hit town, that position was filled forever. It wasn't just for his masterful abilities to play almost every style of Texas music -- rock & roll, blues, jazz, country, conjunto, R&B, and beyond -- that the San Antonio native got tagged Musical Mayor of Austin. Even more important was the contagious gift of giving Doug displayed throughout his life. That's how he really got the gig.

I remember the exact moment Sir Doug's presence hit my life. We had heard he was coming from San Francisco, and bringing with him the great drummer George Rains. For some reason, George's drums were being shipped to Big Boy Medlin's house on Pearl Street. Stopping by early one evening, I saw all the beat-up black cases in Medlin's living room. Like a kid on Christmas morning, I couldn't resist opening them to look at the scruffy set of Gretsch drums I knew so well from the photos of Rain's playing with Mother Earth and Boz Scaggs. It felt like something momentous was lurking just beyond the bend, and like most of those moments, we all knew things wouldn't be the same again. As Sahm started playing around Austin, at the Armadillo and his home-away-from-home Soap Creek Saloon, his sets were the kind that made your jaw drop during the first set, and live on in your chest the rest of the night.

There simply is no way to describe the music that came out of the man, except to say without a doubt -- for my money -- he is the single most talented Texas musician who ever lived. Sounds flowed so openly from his soul it was like he was this huge gusher erupting from underneath the earth, and there was no way to cap him off. Just when you felt you'd finally figured out all the high wire acts Doug would pull, he'd be up there again on his musical trapeze, dazzling your heart with yet another song or style or subtle sound. Twenty-seven years of watching him and there was never a single second of boredom.

When I began writing for the Austin Sun, I knew the first interview I wanted to do was with Doug. Jim Groenewegen, the Sun's camera operator, had been Sahm's road manager over the years and offered to take me to his house on the hill above Soap Creek. It felt like Shangri-La. After talking for a whole afternoon, Doug offered to up the ante by bringing Roky Erickson over. You could have knocked me down with a feather. Roky's new single, "Starry Eyes" b/w "Red Temple Prayer (Two-Headed Dog)," was about to come out, produced by Sahm himself. When Roky arrived, it was like a dream come true for me, and Doug knew it. He loved to drop a cherry bomb in your brain, as if to say, "You think you've seen something, well, check this out. We're just getting started!" By the end of the interview, and a dozen joints, Doug gave me a grin I've never forgotten. It was like a seal of brotherhood, one that stayed strong forever.

The Seventies wound around for another five years, with Doug taking his musical shots at success, some of which got noticed and some that didn't. The true test for Doug wasn't whether the world put its stamp of approval on it or not, but whether it made him groove. One fling stands out from those years, and that was the Great Bus Trip of '79. It was decided the East Coast was calling, so Doug Breeding and his crew of crazies got enlisted to dust off the old school bus and go to New York City. For some reason, I got picked to document the trip. Man, what a ride. 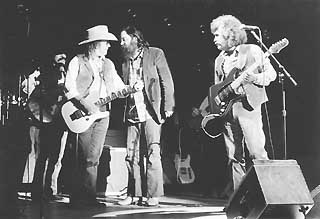 We drove straight through to Washington, D.C., for a warm-up gig at a club called Child Harold's, or Shot of Heroin if you asked drummer Richard "Eh Eh" Elizondo, aka the Penguin. After three days in a '58 bus with 10 guys, Doug and the band were ready to burst. He had me call all the Texas representatives and congressmen in D.C. to invite them to the club, and then proceeded to tear the joint in two without hardly trying. That night, the Penguin, tenor player extraordinaire Rocky Morales, and I got locked in the club overnight, with all the liquor bottles left out. When Doug found us the next day, he literally fell down laughing, and talked about it the next 20 years.

Shortly after that run I moved to Los Angeles, and while Doug never understood why I wasn't in San Francisco, he would always cut me some slack by saying, "I know you gotta eat." All through the Eighties, he would hit town for various shows, some up and some down, but he never did less than his best. That was his real gift: to find the good in every day. When the Nineties started and the Texas Tornados were born, Doug was back at full tilt, and I was lucky enough to be working at the band's label, Reprise Records. Those were fine years, Doug always feeling like a proud parent having given birth to the band. When the group left the Nashville division that had signed them, we tricked Reprise's Burbank president Howie Klein into taking on the band. I don't think Howie really knew what he was dealing with, but the day Doug sang him his new song, "A Little Bit Is Better Than Nada," Klein went for it on the spot. Once again, Sir Doug the magician hit the long ball. After the album 4 Aces came and went, little did I know Doug and I were actually moving into Act III.

For a couple of years, Sahm had been raving about a country singer named Ed Burleson, and when Doug raved, I listened. Reprise A&R VP David Katznelson and I felt a new label was in order for Ed, and of course it had to be called Tornado Records, with Doug as the literal head of talent. That's when things really got interesting. Hourlong phone calls with Doug became a daily routine, and his ideas became as endless as his music. We'd talk about everything we were going to do with Tornado, including his own all-country album (which thankfully got finished last month) and 100 other schemes. He'd drive to L.A. for a meeting, as often as not in the front seat of his Cadillac, or with both of us laying on top of his bed at Studio City's beloved Sportsmen's Lodge, preferably with a baseball game on TV, just in love with life's gracious possibilities. I've been excited by a lot of things in this brief life, but to be in on the ground floor of a Doug Sahm enterprise is right there at the top. We were rolling, with our hearts wide open and completely in love with the idea that we'd lived long enough to arrive at this amazing place.

Except, sadly, he didn't. Ed Burleson's album release party in Dallas was a few weeks ago, and Doug was walking on air. He'd assembled a stellar group of players he'd dubbed the Phantom Playboys to back Ed, and the show that night gave me the same goosebumps I used to get at Soap Creek. Doug did an opening set and a few songs scattered throughout the evening, and near the end of the night trotted out the tune "Texas Tornado." One more time my mouth hung open and I could barely breathe it was so beautiful. When the song ended, I felt like I'd finally seen peace, so I decided to slip down the side stairs and walk back to my hotel. It was misting, and as I cruised down Elm Street a prayer came to me, which I immediately tagged "Doug's Prayer": "Dear God," I prayed, "help me deserve this day." That's the cloud of contentment I was on.

When I found out last Thursday that the impossible had happened, I thought back to that prayer and realized how much Doug Sahm had been teaching me all these years. In so many ways, he was a messenger, and while he was not a perfect man, he had an ability to inspire us to be what we were meant to be and not what we had settled for. He taught by example, and now we are left to live his example. I only hope I'm able.

I'd recently found a new best-of collection on Doug, and I put it on the day he died in Taos. Like all his albums, one song got stuck in my mind for a while, and when this verse played, I could only look up to the sky he loved so much and thank him again. 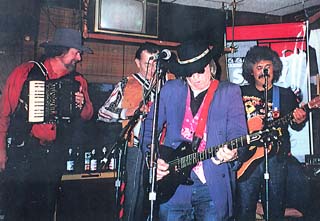 The Texas Tornados at the Hole in the Wall

I just had another birthday.

Scorpios are moving along,

And there's one thing I learned.

As I reach way out there to find,

Doug had just had a birthday five days before he died. And God knows he always believed Scorpios were moving along. As for singing a happy song, that's what Sir Douglas Sahm tried to do every day he was alive, and I know, without a single doubt, he did it. That day I also came to realize what took Doug away from us, which helped me accept the huge emptiness everywhere: His soul had simply gotten too big for his body, and he had to go somewhere where it could wander without walls.

So Mr. Texas walking is now wandering around heaven all day, and hard as it might be, I'm trying to stay happy for him. For us, it's now Life A.D., After Doug, and we have to keep our souls free, as he once advised, "because if you lose it, you will lose everything in this world." Amen, my brother. Go with God.