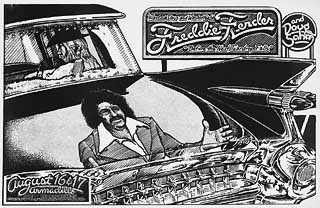 Micael Priest and the Freddy Fender/Doug Sahm show at Soap Creek, 1974: One of the Old Masters of Austin’s old school poster artists, Priest remembers getting precise instructions from T-Birds bassist Keith Ferguson about Freddy Fender’s reflection on the back of the pictured Cadillac. In fact, if you look closely on the bumper you can see the inscription, “special thanks to Dave Moriarty and Keith Ferguson.” Priest also points out that Doug Sahm is in the Caddy’s back seat. Look for the artist having a drawing of Sahm with the Grateful Dead appraised on VH1’s new show on rock & roll collectibles airing Thanksgiving weekend.

And then there was the night Doug Sahm brought Freddy Fender to Soap Creek in early 1974. Five years earlier, Doug had paid homage to the one-time Elvis of the Rio Grande Valley on his back-to-Texas-roots opus, The Return of Doug Saldaña, with a greasy, soulful version of "Wasted Days, Wasted Nights" that began with three piano chords and the echo-drenched voice of Doug saying, "And now a song by the great Freddy Fender. Freddy, this is for you, wherever you are," before charging into three minutes of South Texas soul climaxing with Rocky Morales' torrid sax solo.

It turned out that Fender, née Baldemar Huerta of San Benito, was actually in Corpus, living in obscurity and semi-retirement following a string of rock & roll hits recorded in the Fifties, including "Wasted Days"; Doug had seen him play a San Antonio drive-in at the peak of his popularity and was mightily impressed. He didn't witness Fender's rapid decline, culminating in an extended term in Louisiana's notorious Angola prison for the crime of possessing two marijuana cigarettes. By the time Doug did his shout-out, Fender was working as a mechanic, attending Del Mar College, and playing bars and cantinas on weekends, mostly for spare change and pleasure.

"Wasted Days" was a frequent request at Soap Creek, where Doug functioned as house band in the early Seventies while living in a rented mansion a couple hundred yards down the road. For all the hype the Armadillo received, Soap Creek was really the nerve center of the fresh new Austin music scene, nestled way back in the cedar brakes a quarter-mile down a dirt road off Bee Caves Road back when Westlake was still more or less open country. If the cops had any intention of messing with the unusual breed of hippies hanging out at the club, there was plenty of warning.

As it was, the authorities left Soap Creek and its habitues pretty much alone (I do remember future sheriff Raymond Franks showing up unannounced one night in search of votes), so it was not uncommon to find a slew of fans cooling off and hanging out outside during the band breaks, openly passing around joints -- a ritual unique to Texas at the time. Not for nothing was the softball team that Doug coached and I played for called the Soap Creek Bombers. Sahm and friends at Soap Creek, 1973 (Photo By Burton Wilson)

It was after one too many requests, then, that Doug went looking for Freddy and found him. A gig was booked with Freddy as the headliner and Doug as the opening act, assuring the low-ceilinged room would be packed.

I showed up in the afternoon, hoping to get an interview, but Freddy wasn't around. I did find Rocky Morales and Richard Elizondo in an old Mercury parked by the club, both of them passed out from a round of drinking Mad Dog 20/20. I woke them up and gave them a ride to a convenience store because the Merc's battery was dead. Richard, a hunchback dwarf who drummed and could sing Dean Martin better than anyone I've met before or since, introduced himself by saying "Gimme four" -- his left hand lacked a thumb -- and launched into a manner of speech I can only describe as his own language, punctuating the conversations with "eh eh's" and "que que's." It was then I realized how really strange and exotic El West Side of San Antonio and the world of Sir Doug really was. The Mad Dog purchased at the convenience store wasn't bad either.

Freddy finally showed up after dark, visibly nervous and apprehensive. He wanted to play, but he was clearly uncertain about the venue and the clientele, no matter how much Doug reassured him. When showtime rolled around, Fender returned dressed for the occasion in a long-fringed leather vest -- his interpretation of hippie fashion; only the matching blue outfits with flared bell-bottoms worn by Steve Jordan and Rio Jordan, another special guest act who appeared at Soap Creek at the behest of Sir Doug, were cheesier. (I later learned for all their sartorial futility, Jordan's entire band had been tripping on acid that night.)

Doug and his band warmed up Freddy by doing their usual thing, working himself and the audience to the "all-buttered-up" stage by 10pm, a full two hours earlier than normal. When Fender finally jumped onstage, his eyes had that frozen, deer-in-the-headlights look, telegraphing the message, "Where the hell am I and of all people what am I doing here?"

The start of his set was sprinkled with pop and country standards of the moment, a smart tactic that typically pacifies a Holiday Inn lounge audience, but exactly what the crowd didn't want to hear. Freddy got more comfortable when Doug joined him on stage, and finally loosened up -- no doubt influenced by taking a band break and accepting rolled gifts of kindness from strangers -- and then proceeded to wail away in the Heartbreak Key, his distinctive tenor voice in beautiful form. While reeling off his old hits like "Crazy Crazy Baby" and yes, "Wasted Days, Wasted Nights," punched up by Rocky Morales' sax, Freddy even tore off some surprising guitar licks that gave Doug a run for his money.

It was a breakthrough for Freddy Fender. Within a year, one of the songs he sang that night, a sugary ballad called "Before the Next Teardrop Falls," shot up the pop and country charts to the No. 1 position simultaneously, followed by a new version of "Wasted Days, Wasted Nights." In other words, if not for Doug Sahm, Freddy Fender probably would still be working on cars back in Corpus, wondering about what might have been and never was.

So Doug, this one goes out to you, brother, wherever you are. You're one beautiful cat.

Augie Meyers
“You can’t replace Margaret. There’s no more people like her.”