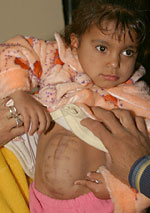 No More Victims works for peace, one wounded child at a time

Truth Is the First Casualty

Transit workers and Cap Metro contractor get closer, but still no agreement

Accenture loses another contract in Colorado, but keeps doing business in Texas

Point Austin: Blame It on Grandpa

In search of heroes and villains over AMD

Take Cheney away; and IBM's plans for the middle class

The Best of Shel Silverstein: His Words His Songs His Friends

The Legend of Johnny Cash

The Very Best of Rosanne Cash

Working for the Man: The Greatest Hits

But Beautiful: The Best of Shirley Horn

Memento: The Very Best of Dead Can Dance

The Best of the Beta Band

Sliver: The Best of the Box

The Best of Snoop Dogg

AFS Celebrates Its 20th, and You Can, Too!

Last week, I launched a riff on 'fascinating' TV-related events of 2005. Here's where I left off.

In a Lonely Place

Munich is dense, thoughtful filmmaking that nonetheless flies along: Seething not only with multilayered, subtextual arguments, it’s also a heck of a thriller.

The film's wonderfully over-the-top performances often feel constrained by first-time film director Susan Stroman, whose inexperience behind the camera is all too apparent.

Fans of The Graduate should skip this strange comedy, which posits that the real-life inspiration for counterculture icon Benjamin Braddock grew up to be a cheesy, brainless high tech zillionaire doing yoga and driving a Mercedes around Half Moon Bay.

Wolf Creek is an accomplished Aussie version of The Texas Chainsaw Massacre; it's also a viscerally told slasher film that manages to do an awful lot with very little.
arts & culture

On the centenary of Dmitri Shostakovich's birth, Austin arts groups join forces to throw the Russian composer a yearlong party

The Last Shall Be First

After 17 Decembers performing 'A Tuna Christmas' literally thousands of times all over the country, do the folks involved have some holiday tales to tell?

Austin's improv headquarters is fielding its own nationally ranked team (of comedians, natch) to put a live comic spin on the Rose Bowl championship

As George Carlin brings his Off-Base and On Target tour to Austin, area comics talk about this savagely funny and influential stand-up artist

Beyond Belief: Belligerent intolerance is no testament to faith

Does fish oil work as well as Tricor to reduce triglycerides associated with diabetes?