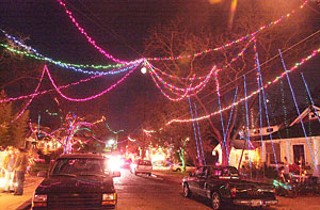 Eighty-four-year-old Ray Pine was disappointed when he saw a woman walk past his house on 37th Street during the Christmas season last year with a baby in one hand and a beer in the other.

For about 20 years, 37th Street dwellings on the block just east of Guadalupe have featured elaborate, complex, and occasionally ludicrous Christmas light displays. People's changing attitudes toward Christmas, however, has in recent years cheapened and commercialized the season, Pine said, resulting in Christmas on 37th Street being treated differently than in years past: "as a holiday when people get drunk, making a Sixth Street out of it," as he put it. Last year, for example, he said he filled three yard-waste bags with beer cans and bottles he picked up outside his and neighbors' homes during the first week of his street's annual lights extravaganza.

The party attitude toward the neighborhood has extended in recent years beyond the holidays as well, said Pine, who, since 1947, has owned 12 houses on the street, which he often rented to students. Each house had a stipulation in its rental contract warning that if Pine had to be called more than twice about noise disturbances, the tenant got kicked out. Other property owners had similar stipulations in their rental contracts, but not any more, said Pine – who has gradually sold off his remaining properties, including his own house, and recently moved into a retirement home.

Area residents tend to agree that the neighborhood is changing. They say houses packed full of students – prone to loud, late-night partying, scattered trash, and hordes of poorly parked cars – are more of a problem than ever before, and they want the city occupancy limits of up to six unrelated individuals in a single-family zoned house reduced. The entire area was rezoned with new land use maps in the summer of 2004 under the Central Austin Combined Neighborhood Plan. Within the plan, neighbors designated an area close to UT, known as the University Neighborhood Overlay, to be the desired area for student density and affordable housing. That area doesn't include 37th Street, note neighbors, who insist they're not anti-student nor anti-density. The neighborhood simply needs occupancy buffers to preserve its character, they say.

Mary Gay-Maxwell, a past president of the North University Neighborhood Association, said it's the families and owner occupants "who keep the neighborhood stable" since students are a transient population by nature. "Without a change, this area will turn into another West Campus student ghetto," Gay-Maxwell said.

Among other residents, Scott Barnes, co-president of NUNA, hopes decreasing occupancy in the area's old houses to three or four people will curb what he called "frat-mentality" housing arrangements. Barnes, who has lived on 35th, just south of the Christmas light extravaganza, since 1989, began to suspect earlier this year that the previous peaceful coexistence between homeowners and student renters was beginning to deteriorate when, he said, a drunken college student called him a "faggot" after he asked the student not to park in his driveway. Barnes said he's considering a move to Georgetown's historic district, balancing cheaper real estate with a longer commute.

Austin native Frankie Estrada, a UT finance major who has lived on 37th for two years, said he doesn't think things are any worse than other university-area neighborhoods and that some noise should be expected. "I bartend so I get home around 2:30 or 3am on Thursdays and weekends, when you'd think it would be loud, but it isn't at all," he said. While a lower occupancy limit might help the street's crowdedness, it wouldn't have any impact on noise and student behavior, Estrada said, admitting that he and his roommate – who now share a three-bedroom bungalow after their third, nonstudent roommate moved out – may be among the loudest on the street.

Neighbors partly blame changes in the neighborhood on irresponsible and absentee landlords. "We didn't demand all we could get from the houses," Pine said. Now, eager to reap the highest rents possible from the maximum number of tenants, greedy landlords are letting "kids get away with murder and won't do anything about it," he complained. The street's foil-covered, light-packed main attraction home belongs to light display co-founder Jamie Lipman and his wife, Sharon Smith. Last holiday season, Lipman was involved in a fight with three young men during what he called "one of the street's numerous outdoor drinking parties." Lipman said he was "beaten upon" when he intervened to stop a college-aged male from running up and down 37th, "harassing people" and "humping cars."

Both Barnes and Gay-Maxwell pointed to a growing number of California home addresses popping up on the area tax rolls, a phenomenon reported all over Austin. When the house next door to Barnes sold and was immediately offered for rent, he said the realtor told him it went to a West Coast actress, and that California real estate mavens were being advised to sell off their pricey sunshine state holdings and park their money in Austin's market to cash in on anticipated rising property values. Gay-Maxwell worried that some California investors are buying for the sole purpose of packing the homes with six unrelated renters. She and other neighbors recently met with City Manager Toby Futrell about this and other neighborhood occupancy concerns. "The city must look at the infrastructure they need to provide in dense areas to manage thousands of 18 to 24-year-olds beneficially and think about what it means to densify beyond putting more people close to town," Gay-Maxwell said.

Barnes – who counted five homes that have changed hands this year on 37th Street, compared to what he said is usually one – is concerned about homeowner flight, and is dismayed as more homes are swooped up by investors. "Unfortunately, that's the free market system at work. If someone wants to buy a house in a desired area, which this is, they're going to do everything to maximize their investment," said Lucy Gallahan, zoning review manager for the city's Watershed Protection and Development Review, adding that a change in occupancy limits would ultimately have to go through City Council. Council Member Betty Dunkerley said she'd "be willing to consider" an occupancy change, but that it would be difficult to enforce. An occupancy limit could only be implemented citywide and would require an intense impact evaluation, Dunkerley said. Like Barnes, Dunkerley noted that occupancy measures would need to be carefully crafted, so as not to target migrant workers and low-income families, who often share homes in town.

This year's sparkling, car-packed 37th Street light display is just a little less dazzling than in years past, thanks to about five vacant houses and the relocation of some longtime participants. That hasn't stopped smiley-faced crowds from seeking electrified yuletide enchantment, however. What remains to be seen is whether a combination of neighborhood strategy and city lawmaking can dictate where party-prone student renters reside any more than a hodgepodge of community involvement and local law can control a beer-drinking mom looking at Christmas lights.

37th Street Lights
Will they burn brighter or burn out?