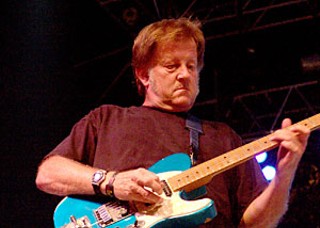 Had Tobe Hooper not chosen Cam King's "Circuit Queen" for the original Texas Chainsaw Massacre, Marcia Ball might never have picked the song for her Capitol Records debut in 1978. Two years after being hailed for his country compositions, the New Mexico-by-way-of-Texas guitarist-songwriter put down his acoustic guitar, plugged in an electric, and founded the Explosives with Freddie Krc and Waller Collie. Within a few months, the New Wave power trio shared a stage with Roky Erickson. King moved to L.A. in the mid-Eighties and then Nashville in 1991, where his songwriting career took root.

That's the short version of Cam King's life, one that glosses over his time in San Antonio playing with Joker Moon, years in Austin bartending and playing in bands, and the sporadic success that came from those efforts. King played in the Grand Ole Opry, auditioned for Johnny Cash, and hobnobbed with Nashville royalty. When a band called Lonestar recorded King's composition "Heartbroke Everyday," it went to No. 15. After Garth Brooks recorded King's Christmas gospel rocker "Baby Jesus Is Born," it appeared King was in Nashville for good. For good, that is, until he was bewitched by local songbird Kim Miller, whom he lured to his farm in Tennessee before the two relocated back to her digs in Wimberley this year.

That move brought King not only peace of mind, but the chance to build his own Hardscrabble Recording Studio. Earlier this year, King and Krc released KaBOOM!, a 2-CD anthology of the Explosives music (austinchronicle.com/issues/dispatch/2005-02-11/music_phases9.html). He and Miller pursue their music individually and together, often performing around Wimberley. Moving back to Texas also afforded King the chance to regroup the Explosives, who added Chris Johnson of McLemore Avenue on bass. King's powerful guitar leads frame Roky's gorgeous ballads and fuel-powered rockers, while his rubber-faced expressions convey good humor and a finely sharpened wit.

Krc is beyond pleased with the situation. "Cam has been my best friend for 25 years, and we work unbelievably well together, always have. We never have to discuss what the other wants musically, we work by instinct." It goes without saying that "both of us really enjoy playing with Roky again, too."