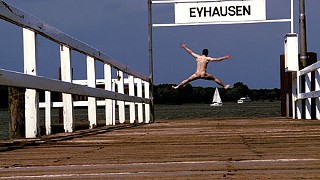 
The lure of the road movie, with its combination of claustrophobic character analysis and wide-open sets, is undeniable. They serve as necessary reminders that life is about the journey. In Bomber's case, three family members have different journeys: the father, one of guilt and forgiveness; the mother, one of self-discovery; and the twentysomething son, one of frustration and self-loathing. The three journeymen are shoved in a van and trek across Europe, butting heads repeatedly to both dramatic and comedic effect. For a movie that follows the rules of the road so closely, it helps that director/writer Cotter hits all the bases solidly: The script reads naturally, the characters are endearing, and the cinematography is evocative and fresh. Echoes of Little Miss Sunshine abound (right down to the indie soundtrack and Helvetica titles), but Bomber doesn't tie up the loose ends quite so tightly. Cotter's road extends into the horizon as the credits roll.