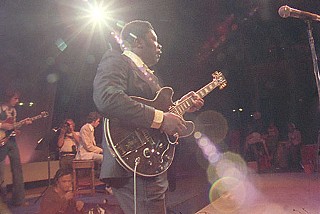 
The "Rumble in the Jungle" was the main event, but this concert in the Congo was a hell of an undercard. The three-day festival in Zaire paired James Brown, B.B. King, and Bill Withers with top African talent before the epic 1974 Ali-Foreman title bout. Soul Power serves as a companion piece to 1996 documentary When We Were Kings, mining the same 16mm archival footage that sat in rusty cans in a Jersey warehouse for three decades. The film uncorks magical moments like Celia Cruz belting out "Cuando Llegaré" accompanied by King's strumming on the 13-hour flight and Ray Barretto inciting a jamming drum circle at an open-air Kinshasa market. The concert commences with Withers' devastating ballad "Hope She'll Be Happier," but Brown – who, like Ali, transcended entertainment – is the star of the show. Artfully stitched together sans narration, Soul Power stands alongside Wattstax as a critical concert film of the Black Power era.