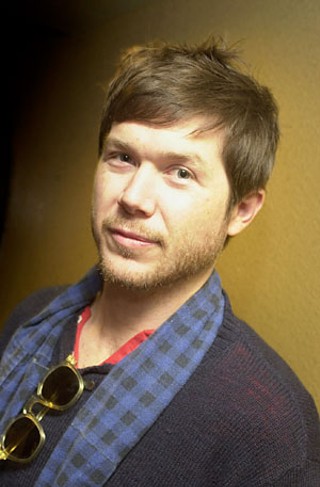 For an actor who's appearing in four films at South by Southwest this year, Barlow Jacobs seems strangely at ease (Four movies in one festival! That beats everywhere-man Mark Duplass by a mile). The 30-year-old Tennessee native plays a disgruntled homeowner in St. Nick, a cab driver in That Evening Sun, a theatre attendant in Ry Russo-Young's You Wont Miss Me, and in Alexander the Last, he's a young, Southern actor, a big lug newly arrived in New York who's a little woozy and reeling from big city life and its befuddling complications. In person, Jacobs seems much sharper and ambitious than Jamie, who he plays in Alexander the Last and is the largest of his four roles at SXSW. "I always looked at that character like he was the most artistic guy in his frat," Jacobs says. "He's a little bit of a meathead in that sense, and he's just kind of blowing in the wind. That's not me at all; I'm a lot more calculating, I think."

Jacobs arrived from L.A. on March 13 and left town a few short days later; during that time, he made it to all four of his films' premieres but set aside just as much time to hang out with all his friends who made and acted in the four movies that have taken up much of his waking hours this past year. That social aspect of filmmaking may be the reason Jacobs seems so calm for a man who had a relatively dizzying schedule of premieres during the festival. In fact, the contemporary American indie film scene seems like it's been one big, enveloping hug for Jacobs ever since he got involved in it. "The beauty of all four films I worked on is that I'm really close to all the filmmakers, who I rarely get to see on a regular basis," he says. "The hecticness is less with running around to see all the films; it's making sure I get to see all these Austin people I'm friends with."

Jacobs, who is also a screenwriter, was able to act in four movies this past year partly because not each of his roles is a major one, even though he enjoys creating a personality for a character who appears only briefly in a film. In David Lowery's beautifully still and inquisitive drama St. Nick, Jacobs pops onscreen suddenly as a peeved homeowner who returns to his empty and locked-up house to find that two little children have made themselves right at home. "The reason I loved this script so much was I was those kids who are running away," Jacobs says. "I was that kid who was playing in abandoned houses and got kicked out of abandoned houses. And especially when you're a child, it seems so traumatic – those experiences stick with you." Jacobs showed up on the set, and the director "throws me in the house with them, and I'm yelling at them," Jacobs recalls, because that's what his role required. The kids stopped talking to him after that. "Their mom came up to me and was like, 'They don't really like you very much.' That's blurring the line between what's real and what's not real and trying to get the most authentic performance from them and from me. It was great."