Sons of a Gun


The documentary opens with facts about Americans suffering from mental illnesses – how many are actually being helped by the government and how many are left to find housing and work on their own. Had I not read the press material, I would not have known what mental illnesses these men were suffering from – schizophrenia, it turns out, but Medow and O'Toole's film never makes that explicit. At times, one worries that the subjects are being exploited. Sons of a Gun follows four unrelated men who are living together in a motel and trying to make it ("They don't even put four prisoners in one cell," says the caregiver). Each is suffering from his own mental illness, and the one in charge (the caregiver, Larry) is constantly drinking from a bottle of Wild Irish Rose – a questionable situation for those he cares for. Running at just more than an hour, the documentary certainly kept my attention, but more time could have been added to further explore the backgrounds of these men. 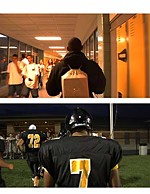 Sons of a Gun