The comedian and showrunner will speak March 9 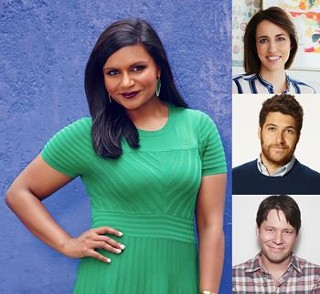 Mindy's got a new project.

Mindy Kaling, the actress and showrunner behind Fox hit The Mindy Project will speak Sunday, March 9, with Marie Claire Editor-in-Chief Anne Fulenwider about "the competitive landscape brought on [by] the emergence of digital players like Netflix, Amazon and Hulu, evolving audience expectations and the opportunity for women in television to leverage these changes," according to a South by Southwest press release. Kaling got her start in the industry as The Office's Kelly Kapoor.

Castmates Ike Barinholtz and Adam Pally will join the session later on to talk specifically about how The Mindy Project has been shaped by Kaling's vision. Given the broad scope of the panel, it's filed under the "convergence" banner, which makes it open to all Interactive, Film, Gold, and Platinum badgeholders.

Be sure to stay up to date with all our ongoing SXSW coverage at austinchronicle.com/sxsw. The festival runs March 7-16.