Novelties are the benchmark of a great society, proclaims starry-eyed inventor Johnson (Kuehn). But he's no Da Vinci or Edison: His genius lies in the realm of sneezing powder, pet rocks, and Slinkies – the pieces of irrelevant crap that make someone a millionaire. Flying on a whim and a dream from Woodville, Texas (population 2,415), to Shanghai, China (population 20 million), to find someone to manufacture his closely guarded "humorous domestic hygiene product," the sweet-natured Johnson falls under the sway of Magnus (Sumpter), an English snake-oil-dealing business consultant after his money. This semi-improvised comedy dances charmingly between the ingenuity of human inventiveness and the deviousness of the duplicity people commit on each other. But instead of making Johnson a naive dupe, the audience is invited to share in his sense of wonder at the infinite creative possibilities. You may never look at fake dog poo the same way again. (Made in China won the Jury Award for Narrative Feature and the SXSW/Chicken & Egg Emergent Woman Award.) 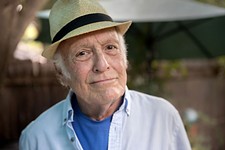