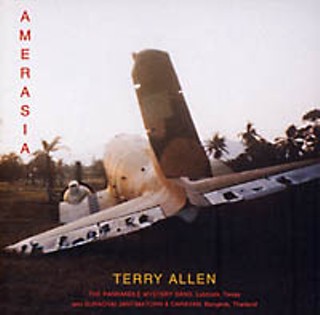 Amerasia (Sugar Hill) "When people tell me it's country music, I ask, 'Which country?'" is the Terry Allen-ism that seems the most apropos when discussing Amerasia, the soundtrack for a 1985 film by Wolf-Eckart Buhler about Americans who stayed in Southeast Asia after Vietnam. For the project, Allen traveled to Thailand and recorded part of the music with a band from Bangkok called Caravan, all of whom had supposedly been Communist rebels in Laos during the war years. The rest was recorded in Lubbock with the Panhandle Band, which included the Maines brothers and Richard Bowden. The results are an unusual amalgamation of politics, patriotism, and panculturalism that was prescient in many ways. This type of musical commingling is more common these days when world music is a defined genre; it also reflects on the aftermath of war, relating even to current events in the Middle East. As with most soundtracks, there are snippets of evocative instrumental music, some performed on traditional Thai instruments, interweaved with tunes written, for the most part, by Allen, while Caravan contributes a couple of tunes sung in their native language. It's unfortunate that the film is no longer available as it might serve to establish a more defined context for the music. Sugar Hill is trying to restore all of Allen's recordings to print and this is the one that shows the breadth of talent the man possesses.