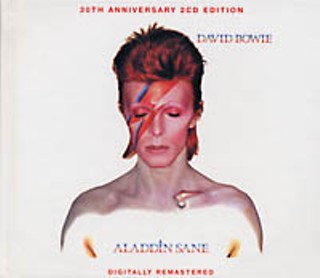 Aladdin Sane (EMI) Aladdin Sane is the great forgotten David Bowie album despite the fact it was his first No. 1 in the UK and first Top 20 in the U.S. Its handsome, 2-CD 30th anniversary edition follows a similar reissue in last year's Ziggy Stardust as a hardback minibook with a bonus disc of outtakes, single mixes, and live tracks. Originally released April 13, 1974, it remains a smart, sophisticated, sexually adventurous, slyly humorous, and highly original look at the pending apocalypse in America. Where Ziggy Stardust had been a studio creation, however, Aladdin Sane was road-tested and honed to fierce perfection. Side one may be Bowie's all-time best album side. The title track was completely original, a testament to guitarist Mick Ronson's genius as an arranger, with inspired piano from Mike Garson. The first British hit, "The Jean Genie," a song written primarily about Iggy Pop, was a brilliant cop from the Yardbirds by way of Shadows of Knight, proof positive that Bowie's Spiders From Mars were a nonpareil band. British hit "Drive-In Saturday" still makes one giddy. "Time" was a live showstopper, often overlooked as one of Bowie's classic tracks. The bonus disc adds the disc's two essential outtakes: a much-improved '73 re-recording of "John, I'm Only Dancing" and the original of "All the Young Dudes," copied closely soon after by Mott the Hoople. Best of all, there are six terrific live tracks from 1972 -- three previously issued as a bonus EP with the Sound + Vision boxed set, one from the live Santa Monica CD, and two additional cuts never available anywhere that demonstrate the band's live prowess. In the end, shy bookish Bowie had become this outrageous, glamorous creature -- Ziggy Stardust -- so at an infamous concert at the Hammersmith Odeon July 1973, he broke up the band. What a beautiful album they left behind.