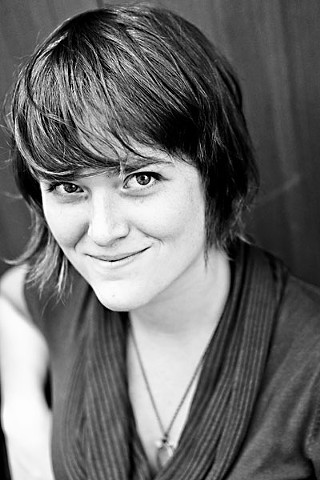 Amber Case is very much the 21st century digital native, living a life fully integrated with technology and looking way beyond common thinking about the Internet and social media. She's a guide to the new world of the digitally transformed human. Fast Company included her in a 2010 list of the most influential women in technology, and her TED Talk, "We Are All Cyborgs Now," has been viewed almost 400,000 times. She's creating a new discipline, "cyborg anthropology," defined at www.cyborganthropology.com as "a framework for understanding the effects of objects and technology on humans and culture." Case points out that, just as in the past, tools have extended our physical selves, and we're building a set of digital tools that extend and inform our mental selves. It's crucial to understand how technology extends our capabilities and shapes our realities as we cultivate and evolve a new world of digital extensions.

Case has been studying how becoming more digital changes the way we think and act. The cyborg was envisioned as a human with implants or, as in Blade Runner, a manufactured human, part biological and part technological. But as the future becomes the present, human extension tends to be more external in the devices we carry and our interactions with them. As we become more digital, says Case, "we tend not to notice our devices as much anymore. Our devices, phones, and computers become a complete part of our lives. It's hard to step back and objectively look at them as tools. They're an extension of our mental selves, and because of that, they're getting smaller and more invisible over time while increasing in power."

Case spends a lot of time studying and thinking about how digital extension affects our brains and behaviors. "The brain doesn't really need that much stimulus in order to create a virtual reality," she says. In early computing, "we thought it would take much more to incite people into these realities," but text and good two-dimensional interfaces are enough to absorb us totally in virtual worlds. "It's mixed reality, where you can be anywhere and you have different virtual realities going on around you – the different tabs in a browser window, text messages you get, Facebook messages, Twitter messages. All of those are different realities in simultaneous time zones that people are living in all the time, and we switch rapidly between these contexts all the time. People are living multiple virtual realities while existing in one reality at a time."

I asked about the overhead for all the virtual switching we do as we bounce from one to another reality, referring to it as "virtual jet lag." "To be fully aware of an environment and take something in that is not fragmented is important for learning and embodying knowledge," she says. "But the problem on the Internet is, say you learn something on Wikipedia; you're not embodied in that knowledge. Rather than learning in a lab, you're reading something about biochemistry on Wikipedia, learning it there. And halfway through the article, you may be checking your email or looking at Facebook; it disrupts the writing of that memory to your brain." This leads to greater fragmentation of memory than we might otherwise experience. "By the time you've finished loading that memory, you've only loaded part of it," she notes. "And if you stay up late, don't get enough REM sleep, your brain can't get through the natural defragmentation process. And you wake up with a sloppy hard drive of a brain."

The way we gather as tribes is changing. Increasingly we rely on robots to manage our attention to each other. "I want to know what's going on in my community, but my community doesn't happen to be next to me like it would have been in an old village or tribe," says Case. "My community turns out to be on Facebook, maybe 1,000 people distributed across the entire world in different time zones. Facebook helps by telling me what's going on in that network all the time; I can go in and get a dose of it. It's a global village model, where the time and space that it takes to contact somebody and to interact is reduced."

This new form of tribalism is compelling – some might say addictive. "People begin this low-resolution micronarrative data, as if everyone around them is in a virtual soap opera, and as they get daily doses it becomes addictive because it's like watching a show of your friends. And you don't know when important information will come in or when you'll get a good message." She compares this to B.F. Skinner's experiments with mice. Some mice were fed predictably when they pressed a button, but others were sometimes fed and sometimes not – reinforcement was intermittent. The latter mice would press the button all day. "There are many intermittent reinforcement loops online, where you don't know when an important email or Facebook message is going to come in. You see people in loops on mobile devices or on computers, where they go from site to site and click and check, click and check. That's very damaging and repetitive. Many are increasingly stuck in a loop, needing this input but not knowing when it's coming, so they keep checking."

Though technology continues to change rapidly, "people aren't really any different from how they used to be, they still need attention," she says. In fact they're consumers of attention, and "there are more ways to consume, and more times to consume" than in the prior era of mass media. Television always has limited content, but, Case says, "I think of the Internet as 15 inches wide and 500 miles deep," she says, "with thousands and millions of channels, versus a television set that has 20 channels."

Increasingly, people produce as well as consume content, but Case sees another behavior: hoarding information. The computer can be a black hole where once you put information in, it's hard to get it out again or have it go away. "It becomes very easy to hoard, but no one is considered a hoarder, because you can't see the giant stockpiles of data, photos, safe Web pages, tabs, and images that people store on their machines. It's invisible. Someone's computer weighs the same no matter how much data you put into it; you would never see how much they've hoarded unless they printed it out." We accumulate data and information that stacks up in computer storage whether it's useful or not. Compare this to the brain, which is "good at figuring what to bring to the top and what to leave behind." Our brains have evolved a natural algorithm for storing memories that will archive and compress them, and unlike data stored on computers, those memories change. Human memory is unreliable – each time we remember something, we rebuild the memory a little differently. Also, as we grow older, our efficient brains will tend to compress memories by ignoring the familiar. However, to the child's "beginner's mind," everything is new, every experience is intense, and the perception of time is different. Hours and days seem longer. Case wants her brain to be always "computing new experiences and thinking of new things so my time stays at the same rate as when I was a kid."

A recent Case project was a real-life game of Pac-Man, "where there were virtual GPS points all over a real map, and everyone went around and pretended that they were Pac-Man eating the dots and competing for them." The idea was to be like children, running and playing. "That sort of thing is important," she says, "because a lot of people are sitting in front of a computer getting unhealthy." She wants to be creative about the physical game space. "Going to a gym is just a mechanical, robotic, industrial-revolution solution to exercise. You need to run around and have fun and play, because your mind and your body need a break." She relates this to her work at the company she cofounded, Geoloqi. "My goal in running a company is to have recess and playground equipment, so that people take breaks and have fun. They become healthier over time at the job, and they're more creative because they're exercising their whole minds and bodies. I think it's important to have a good time and not notice, and to learn and grow together."

Ambient Location and the Future of the Interface

Amber Case, cyborg anthropology, We Are All Cyborgs Now, Geoloqi