How the Internet started searching us 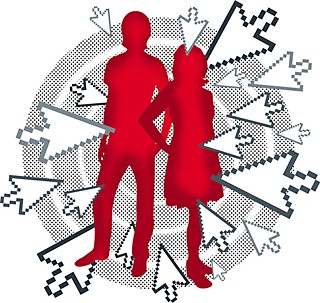 When Whitney Houston died, social networking and info-sharing sites exploded with the news. So, were you refreshing CNN.com that very moment or instead receiving a Twitter alert accompanied by a link and an obligatory sad-faced emoticon from the Houston superfan in your online social circle? What happened to the pre-social Web days when we hunted down the news instead of the other way around? When did we stop searching the Internet and the Internet start searching us?

Maybe the more important issue is how the Internet is searching us. One way is through good old-fashioned math. But this brand of math is more than just that Intro to Calculus class we took in high school. This is the good shit that Netflix will (and did) pay a million dollars for – the kind of calculating that makes us log off Pandora because it's getting a little too good at guessing what else would make our ears happy.

Prognosticating programs aside, by making ourselves easily predictable, we are in fact our own worst enemies. We put our likes and dislikes on display for everyone to see, and where advertisers and companies can hunt that info down to make sure we are getting what they think we want. More often than not, they're right, but it can be unnerving.

But algorithms and simple user specs can't compete with the social network that consists of your best friends, relatives, and co-workers who know you in ways computers can't compute. They're going to know that in grade school you had a black-and-white cat that aggressively intimidated dogs and send you a video link of a like-minded feline. They'll know that even though you'd never admit to it, you love Justin Bieber and want every bit of gossip on that swoop-headed heartthrob. So between mathematical magic and the copious connections that make the Web even more weblike, you're easily getting a full serving of ... stuff. So much so that you might not even click through to that next sneezing animal.

Bill Wasik, editor at Wired, agrees. "The system has become a lot better at showing you things you are going to be engaged with and want to click on and want to fill your brain with." At first glance, these programs merely facilitate the delivery of what we've always wanted from the Web. Obviously, we can't wade through the mind-boggling amount of data at our fingertips without help. Hence the need for the filters that we either choose for ourselves or that companies choose for us. The former are as simple as an RSS feed or Twitter alert. The latter can be as simple as well, like the news bites that appear at the top of Gmail accounts. However, companies also filter on the sly. For example, Google tailors its search results depending on what computer is being used and where it's located, and we might not even notice the subtle differences in what ultimately shows up on the screen. But let's assume that's harmless for now (it's not, though).

Sites that filter our lives also continue to perfect the user interface to such a degree that it's opening up the social web to whole new demographics. "Facebook managed to bring people into the sharing economy that I would say even techno futurists in 2002 or even 2003 imagined would never get there," says Wasik of the increasingly ubiquitous social site. Facebook not only has brought Web 2.0 and its telltale sharing to the masses, but also made the overwhelming social opportunities seem downright manageable. It and scads of other social sites, such as Pinterest, create healthy localized online communities in an otherwise anonymous worldwide medium. This increasingly democratizes the Web and empowers users, at least in theory. As good Americans, we have to salute that.

But are we being unshackled from the oppressive media powers that once decided what stories should be on the nightly news or what videos should play on MTV, or are we gilding our own informational cages? It's apparent that the Internet can bring to us things that we want to see without breaking a sweat. But what about the things we need to see?

Could the lack of bipartisanship in American politics have something to do with the stories recommended to those on the left and right via their like-minded news feeds and social circles? Today's streams of information increasingly cater to preconceived notions. Liberals are more likely to get stories about Obama's successes with the economy while conservatives are pinged with notifications that gas prices continue to rise. "There's clearly a value to being forced to see stories or opinions that don't jibe with your own point of view," Wasik says.

On the entertainment front, algorithms clearly have their limitations. I think we are all egotistical enough to believe our mothers when they say that we are unique freakin' snowflakes. I don't care if other people who like Smashing Pumpkins also like Arcade Fire – I don't, and I'll be damned if I'm going to let a chunk of code tell me otherwise. Anil Dewan, director of new media at KCRW-FM, elucidates another chink in the algorithmic armor. "We might have a really exciting and dramatic rainy day in LA that's creating a certain mood for the whole town ... and we have a DJ in the studio who can get in there and be tuned into the vibe of the city. They create a show that really reflects that, and you'll never get that from Pandora."

And just as we've started to trust the sites that deliver our regular dose of entertainment and news goodies like Facebook with our personal information, a site like Path comes along, sends your contacts to third parties, and brings issues of security and transparency to the fore. Are apps and other sharing-based sites selling your information to the highest bidder? The legalese of most privacy policies can make even the savviest techies throw carpal-tunneled hands up in frustration. Deborah Schultz, host of Tummelvision, which struggles to humanize tech, puts some of the privacy onus on the user. "If you left your car running with the keys in it on the street and it was stolen, I would say to you, 'You're an idiot,'" she admits. "We need to get to a place where people view their personal data as much of a valuable commodity as their physical belongings."

Reconciling our desire for viral videos with hard news – or our desire for freedom with privacy, our desire for entertainment suggestions with a human touch – sounds like a nigh impossible task. But perhaps all that's needed are a few happy mediums. KCRW, for example, has an iPad app that uses DJ-curated content as a starting point and gives users the choice of passively letting it play or opting to tap and explore certain artists along the way. It's a man/machine DJ'ing collaboration – and possibly the best of both worlds.

For her part, Schultz predicts a time when personal info will be stored in data wallets that you can then share with sites and businesses that you deem worthy and that hopefully have transparent policies about what they do with your increasingly precious online identity. But, she says, "that shift is years away, and it might not look or feel anything like that. It might just be a recognition that data is money."

It would be easy to say that the responsibility for getting hard, impartial news instead of strictly self-affirming content rests entirely on the individual, but at some point, search engines and news aggregates need to step up and realize that there are some stories that are not tailored for the good of individuals but for the good of society as a whole. (We're not going to hold our breath for that one.)

Until the Internet of our dreams becomes a reality, we watch our phones for the next news blast or our Twitter feeds for the latest meme and thank heaven we reconnected electronically with that paste-eating kid from kindergarten. Just don't let the habit of letting the Internet come to you take too strong of a hold. There's a whole crazy world out there beyond your filters waiting to surprise you.

Let's Get Lost: Surprise in the Social Media Age