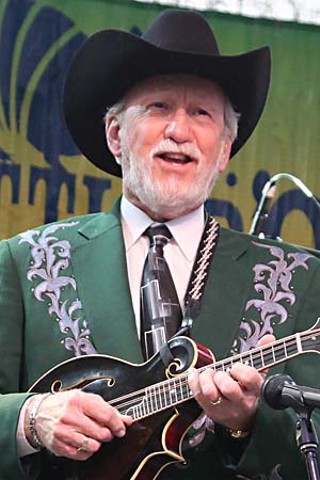 
If not quite liberating, 100-proof bluegrass in a downpour proved exhilarating for those of us grinning ear-to-ear through Doyle Lawson & Quicksilver's truncated early-evening set at the Old Settler's Music Festival on Saturday. "Sorry 'bout the rain 'n' stuff," Buddy Miller muttered good-naturedly during his fat-droplet-inducing performance at the Hill Country stage just prior to Lawson's, which restarted the weekend's April showers. Stage announcements put the Tennessee mandolin master and his backing fivepiece appearing when the elements let up, but if anything, the soak began once the six mountain men hit the stage only 15 minutes late. As handsome as Lawson's dark-green jacket with silver Nudie suit overlay, the group's dauntless fields of mandolin, fiddle, dobro, banjo, guitar, and bass embodied the calming stage address of bluegrass scion Ronnie McCoury fronting the Travelin' McCourys earlier in the afternoon: a walk-with-God/race-with-the-devil duality. Urban life's multitasking never met the sure-footed stroll and sprint of bluegrass, a musical hay bed of acoustic strings suddenly set off in Dale Perry's impassive combustion as his banjo traded smoke signals with the bandleader's mandolin responses and Jason Barie's fiddling lean-ins. In the lead vocal harmonies of Lawson, 66, and guitarist Corey Hensley, Appalachia lapped like a creek. The title cut to 2007's More Behind the Picture Than the Wall demonstrated material to match. And when the rain blew horizontal, they were shut down – not that the proud purveyors wanted to leave. Lawson's smile never left his white beard throughout the blessed 38 minutes of a scheduled 75 that nature so graciously allowed.