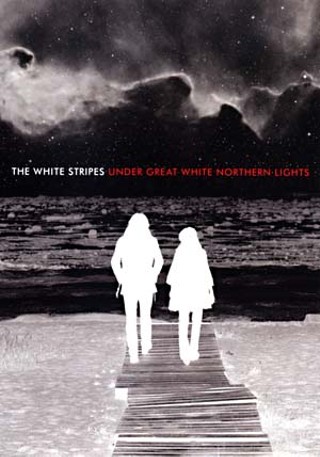 
Capturing the White Stripes' first-ever Canadian tour in 2007 while also marking the Detroit duo's 10-year anniversary and release of Icky Thump, concert film Under Great White Northern Lights became a true documentary when weeks after its completion, drummer Meg White canceled the remainder of their worldwide tour (including the Austin City Limits Music Festival) citing acute exhaustion. As such, it offers a captivating and beautifully rendered window into what might have been the band's final days. Mirroring the divorced couple's sonic relationship, Meg is introverted and soft-spoken, requiring subtitles when she actually does speak, while Jack White overcompensates in every possible way, alternately liberated and constricted by the Stripes' tricolor minimalism. "You can bleed some things dry," he admits. "Sometimes you just force yourself to work, and something good comes out of it." The sold-separately CD soundtrack reiterates that point, capturing the pair's post-millennium blues, from the scat-rap, tornado groove of "Icky Thump" and electric mandolin haunt "Little Ghost" to the proto-punk, Maximum R&B of "Let's Shake Hands." As the visuals confirm, the two perform as much to each other as they do to an audience, Jack attacking his guitar with stuttering, electric-seizure solos and mad organ dashes while Meg bobs away. His falsetto bottoms out during "Blue Orchid," and he cracks at the seams during "I'm Slowly Turning Into You" but still nails ultimate closer "Seven Nation Army." The soundtrack should warrant a second disc devoted to the group's "B-side" impromptu shows from the film, such as the chilling "Black Jack Davey" delivered at an outdoor pavilion in the small providence of Whitehorse and Blind Willie McTell cover "Lord, Send Me an Angel," performed for Inuit elders at a retirement home in Iqaluit.