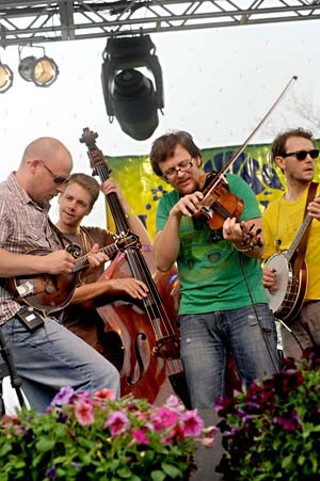 
Warding off the rain as Friday afternoon rolled toward evening, the Infamous Stringdusters kicked into their second set at the Old Settler's Music Festival with a pleading note. "I wish it was a sunny day, the clouds they follow me," pined Andy Hall over his hot-lick dobro on "You Can't Stop the Changes," opening track off of the Nashville sextet's brand-new third LP, Things That Fly (Sugar Hill). Since hauling in three International Bluegrass Music Association awards for their 2007 debut Fork in the Road – including Song of the Year and Album of the Year – the 'Dusters new-blood talent has proven plenty, and their festival circuit experience has likewise honed the group's live set, forgoing slower ballads in favor of blazing breakdowns wherein the unit hunkers down together and pushes into semi-improvised duels of shifted tempos. The guitar and banjo showdown rose to fever pitch across "Well, Well," while instrumental "The Deputy" smoked with Jeremy Garrett's fiddle. "Echoes of Goodbye," from Garrett's solo effort, I Am a Stranger (Vanguard), rang traditional alongside the upbeat, downtrodden stomp of "17 Cents." Behind bassist Travis Book's tenor whine, Flatt & Scruggs' "I'll Stay Around" was given its due with the exceptional guitar picking of Andy Falco, who shone the entire show. The mellower turn of "Masquerade" struck too subdued for the growing crowd but was offset by the easy jam of "It'll Be Alright," and an epic, 10-minute instrumental send-off.