I Learned the Hard Way (Daptone) 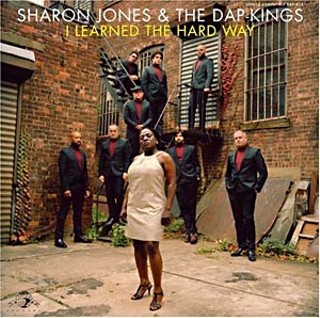 I Learned the Hard Way (Daptone)


I Learned the Hard Way jumps off in dramatic fashion, 10 seconds of cinematic flair and brass fanfare as the Dap-Kings roll out a red carpet entrance for Sharon Jones, the undisputed queen of retro soul. The fourth LP from the Brooklyn soul scions is indeed Sharon's show, but the band swaggers on the opening triumvirate including the string-laden title track and Memphis soul strut "Better Things." Otherwise, the latest Daptone delivery is an exercise in restraint, the string of tempered hard-luck love songs veering from blues to doo-wop while clocking in at a vinyl-friendly 39 minutes. The LP's easy pace – split by a sublime instrumental interlude – allows the 53-year-old frontwoman to emote, chastising a lover with wandering eyes on the organ-kissed "Window Shopping" and begging and pleading on the Bobby Bland-inspired "If You Call." The Dap-Kings' most complete album closes with the stripped-down gospel thump of "Mama Don't Like My Man," a far cry from the rough funk of 2002 debut Dap Dippin' and a move that proves Sharon Jones & the Dap-Kings have learned a thing or two since then. The hard way, naturally.