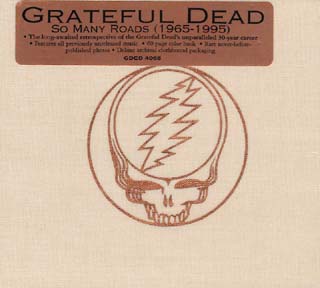 The real challenge here must have been how to adequately and accurately condense roughly 2,500 live performances over a span of 30 years down to a 5-CD set and still do justice to this most extraordinary of American musical legacies. To their credit, the pantheon of Dead archivists and scholars who assembled this chronological collection of mostly commercially unissued live and studio performances are well-versed in the immense Dead canon and obviously knew where the treasures were hidden. Make no mistake, there are some absolutely brilliant gems throughout the set. The chronological layout gives you a good sense of how the Dead and their music evolved over the years. Beginning with the band's early Dylanesque folk incarnation, the Warlocks, who open the box set with a demo from 1965, So Many Roads overflows with the sensory overload of cutting-edge psychedelic warriors, who nightly cranked out ferociously intense acid trip soundtracks that remained incredibly vital and ultimately matured into a musical ethos that's made the Grateful Dead icons of 20th-century cultural Americana. The set overall is weighted a bit too heavily toward the band's last 10 years, in lieu of far more fertile and adventurous periods in the Sixties and Seventies. It also would have been nice to hear more of the band's first keyboardist, Ron "Pigpen" McKernan, from the early days. Still, it's hard to argue about the quality of most of the selections. The Dead's forte was always the telepathic interplay that defined their extended forays into the musical cosmos and this collection is chock-full of amazing jams from all eras of their history. Often the band's best playing came out of the interludes between songs and so the inclusion of several of these free-flowing aural collages, sans the actual songs, provides us with the musical mortar that holds the bricks in place. Needless to say, Jerry Garcia is in masterful form throughout with his shimmering, serpentine guitar lines defining the terms of the music at every turn. While most of the tunes will be long familiar to Deadheads, there are a few tasty obscurities such as the coveted "Mason's Children" and a poignantly rendered reading of Merle Haggard's "Sing Me Back Home." This handsome collection also includes informative notes on every track along with swell pix and the requisite essays. Take it from a jaded Deadhead, once you sit down with this set, you'll be back on the bus in no time.