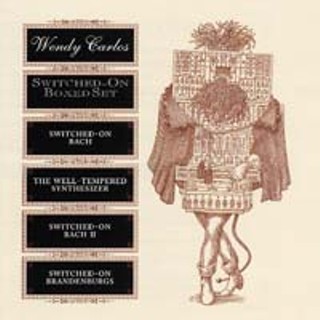 Wendy Carlos has been standing on the avant-garde of electronic music for a long time. In 1968, the composer struck platinum playing the original analog Moog synthesizer on Switched-On Bach and took home three Grammy Awards for it. Carlos then recorded The Well-Tempered Synthesizer, Switched-On Bach II, and Switched-On Brandenburgs -- all included in this 4-CD set -- as well as scoring Stanley Kubrick's A Clockwork Orange. Carlos introduced the vocoder in his Clockwork Orange score and was recording ambient music as early as 1972 with Sonic Seasonings. Ten years and many projects after scoring Disney's Tron in 1982, Carlos was Bach at it this decade with Switched-On Bach 2000. Even without the remarkable soundtracks, this is a tremendously important body of work that was not only the threshold of classical music's new frontier, but the birth of electronica. In fact, it's fairly safe to say that Eighties music never would have happened had Carlos not come along in the late Sixties. The four discs that comprise Switched-On Boxed Set cover only Carlos' work with Baroque music, primarily J.S.Bach, but including Monteverdi, Scarlatti, and Handel too. And most people are more familiar with this music than they realize, through PBS show themes, cartoon soundtracks, car commercials, and other subtle forms of infiltration. "Jesu, Joy of Man," "Allegro Deciso" from Handel's Water Music, and Bach's "Minuet in G Minor" are readily recognizable to the average ear, as are the Brandenburg concertos included on all four CDs. Still, the constant electronic noodling of even the most esteemed pieces can get annoying, something Carlos herself acknowledges in the spoken tracks at the end of each disc. Her insight and commentary make a lot of sense and she's not afraid to cite and include snippets of less successful versions for comparison. Carlos' own genius is such that she doesn't have to be on the cutting edge constantly; she's still fine-tuning her original gift to music and keeps perfecting it. Longtime fans will note, however, that in the reproduction art of the four albums, her name was changed from Walter to Wendy to reflect the composer's gender switch. While Carlos eloquently defends this revisionism for deeply personal reasons and castigates those who would mention it, it bears mentioning because of the questions it raises: If Walter had been Wendy back then, would she have gotten as far as he did? Would Robert Moog have been as receptive to a female disciple or Kubrick to a woman composing his soundtracks? Moreover, if Walter had been Wendy in 1968 winning three Grammy Awards, it would have been a striking and shining example of a woman winning for the first time in those categories still male-dominated to this day. None of this should take away from the brilliant composer Carlos is and the divine music she produces; as a woman I accept Wendy completely. I only wished for her own peace of heart back then that Carlos had been Wendy and not Walter. Win another Grammy, Carlos.