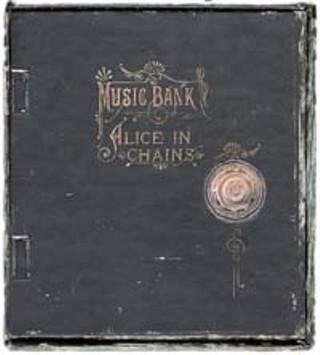 The material on the three music discs of Alice in Chains' long-awaited 4-CD Music Bank is culled from three studio CDs, two EPs, a live album, and import B-sides. That's a meager body of work to mine, hardly enough to fill a box set on its own, and if this were any other band it would be ridiculously piecemeal. Named for a warehouse/rehearsal /living space where Jerry Cantrell and Layne Staley created Alice in Chains, Music Bank is an exceptional collection that bears the unmistakable sentiment of an epitaph. As one of the best bands of the Nineties, Alice in Chains are the ultimate Seattle band, shrugging off the hipper trappings of punk for pure love of a minor chord. They were metalheads who rode the grunge wave via MTV and relentless fan support, never as self-conscious as Nirvana nor as faux eccentric as Pearl Jam, and much darker than the bluesy Soundgarden. They released a string of excellent radio hits and toured until they couldn't. The isolation of the Pacific Northwest reverberates in their moody compositions, propelled by crunching minor chords and lyrics about dispassion, distance, and sometimes the band's downfall, drugs. Music Bank is almost stream-of-consciousness in its sequencing, more of a career introspective than retrospective since it balances the hits with alternate takes and demos. Disc 1 opens with "Get Born Again," one of two new songs released on the Best of Box sampler in June, but quickly reverts back to demos recorded in 1987-88. Much of this material has been heavily bootlegged, but it's illuminating to hear it chronologically and in context, such as the previously unreleased "Queen of the Rodeo," performed live in Dallas. By the time "Man in the Box" kicks in with the material from their first album Facelift, the hard, gray thunder of Alice in Chains is already established. Disc 2 opens with "Rain When I Die" and ends with the triple-platinum "No Excuses," one of the decade's best singles. In between is "Them Bones," "Damn That River," "Would?," "Dirt," "God Smack," and one of the two demos on this disc, "Junkhead," plus a glorious "Am I Inside?" with Heart's Ann Wilson. The third disc opens with "Down in a Hole" and ends with "Died," the second previously unreleased Staley-Cantrell composition recorded in autumn 1998. This is the four-and-a-half star disc, merciless in presentation: "Grind," "Heaven Beside You," the "Tattoo of Pain" mix of "Again," remixes of "What the Hell Have I" and "A Little Bitter," and three cuts from Unplugged -- "Nutshell," "The Killer Is Me," and the exquisite "Over Now." The fourth disc is a real bonus for fans: a CD-ROM game called The Journey, video clips, interviews, and assorted other goodies. Word is that Cantrell will soon be working on his second solo effort; his first, Boggy Depot, was an excellent sign that some of Alice in Chains' spirit lives on defiantly. Drugs haven't killed Layne Staley, but they killed the band, which is a goddamn shame. At least they depart with style, class, and a hell of a box set.