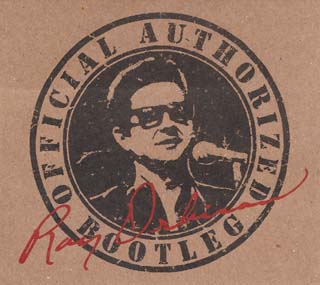 The only thing to come out of Wink, Texas, besides a whole lotta oil and a coyote or two, Roy Orbison became one of early rock & roll's signature voices and remained a popular live entertainer up to his untimely death in December 1988. This 4-CD "authorized bootleg collection" catalogs four of the (other) Man in Black's performances from throughout his career: May 9, 1969, at the Batley Variety Club in Batley, England; October 18, 1975, in Hornchurch, England's Queen's Theatre; March 25, 1980, at the Fiesta Club in Stockton, England; and July 13, 1980, at the Jefferson Civic Center Concert Hall in Birmingham, Alabama. Each disc is more or less an hour long, containing approximately 20 songs, with of course lots of repeats. Sound-wise, the best shows are Batley and Birmingham (which was recorded for an NBC-TV special), though the raucous Hornchurch crowd more than makes up for that date's gauzy recording with an abundance of hooting and hollering. Orbison begins each set with a string of hits, usually "Only the Lonely," "Dream Baby (How Long Must I Dream)," "Crying," "In Dreams," and "Mean Woman Blues"; "Blue Bayou" is pushed toward the front at the Batley show and omitted from the Queen's Theatre gig. Each show, naturally, concludes with "Oh, Pretty Woman," except when he sneaks in "Running Scared" at the end of the Fiesta date. The shows suffer not at all once the hits are through; Orbison's repertoire is well-stocked with plenty of other nuggets, including the rockabilly "Lana," the nickelodeonesque "Penny Arcade," the hardscrabble blues of "Workin' for the Man," the near-operatic "Leah," his melancholy Elvis tribute "Hound Dog Man," and the Memphian "Ooby Dooby." While the 1980 shows find him almost exclusively mining his own back catalog, the other two are notable for interesting cover choices. Though the Batley audience was doubtless more impressed with Orbison's reworkings of "Land of 1,000 Dances," "Money (That's What I Want)," and "Help Me Rhonda," the real gem is a version of J. D. Loudermilk's airport tragedy "Break My Mind" that borders on brilliant. Orbison achieves a similar effect at Hornchurch with Willie Nelson's Christmas fable "Pretty Paper" and Mentor Williams' gospel-tinged classic-rock staple "Drift Away." Short on surprises, but long on the material that made him an integral part of rock history -- and with a promise of more shows to come -- the oxymoronically named Official Authorized Bootleg series is a fine tribute to Orbison's legacy. Roy lives on in dreams, of course, but it's nice to have him back on CD too.