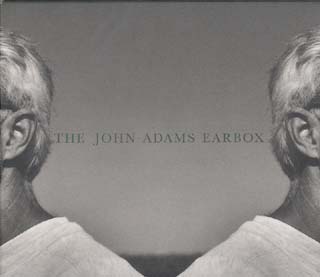 While he might not be as well known as Philip Glass or Steve Reich, John Adams is often lumped together with these two in an impromptu triumvirate of minimalism. Yet this comparison isn't wholly accurate. While an admitted minimalist, Adams is comfortable with the canon of Western classical music; minimalism shouldn't be thought of as repetitive dichotomous events, like switching a light on or off, but rather in terms of pulses, circles, and flows. More importantly, Adams, who has classical cred to burn, transcends the blithe categorizing terms music writers love to use. The savant composer writes with his own unique voice, one which speaks in many tongues: opera, recorded sounds with symphony, concerto, orchestra, synthesized timbres, and chamber. Because he's worked with so many different platforms and tonal hues, it's difficult to capture the full vista of his work. Nevertheless, that's precisely what Nonesuch attempts to do with the 10 CDs that compose The John Adams Earbox, a retrospective highlighting the best of this American composer's work since his partnership with the well-respected avant-garde label began in 1985. Also included are selections which predate the pairing, such as American Standard, one of the composer's first compositions, and a work that Brian Eno -- ever the visionary -- released in 1973 on his Obscure imprint. While all three parts of American Standard aren't included in Earbox, the middle section, Christian Zeal and Activity, resides on disc four. In this work, Adams merges a taped radio sermon with orchestration, and in doing so obviously serves as a major influence for Brian Eno and David Byrne's early-Eighties album, My Life in the Bush of Ghosts. Another work on the fourth disc is 1989's The Wound-Dresser, a soul-touching piece set to Walt Whitman's tale of a Civil War battle nurse. Like all the greats (Mozart, Rachmaninoff), Adams wins a triple-double as composer, conductor, and player, with all three roles represented on Earbox. The impish multi-instrumentalist draws nearly as much from the music of Fifties classical cartoons (1992's Chamber Symphony) as it does from Western classical's pantheon of dead white men (Gnarly Buttons). Plus, Hoodoo Zephyr finds the bookish Adams incorporating synthesizers and samples into his sonic palette. Any document of Adams' work must -- and Earbox does -- include his two famous and debate-inspiring operas, Nixon in China and The Death of Klinghoffer (victim of the 1984 Achille Lauro hijacking). Both Nixon in China and El Dorado, which initially emits like one of Bill Laswell's imaginary sonicscapes before evolving into avant film music, earned Grammys for Adams. The 10th and final disc is a zinger, containing the adventurous and thematic Lollapalooza, John's Book of Alleged Dances (written for and performed by the Kronos Quartet), and Slonimsky's Earbox, an ode to the famous Russian musical theorist who was a major influence on Frank Zappa and John Coltrane. While there's been a lot of talk about the death of rock, Western classical music's doom has been topical since Cubism reared its boxy head. Like rock in transition, Western classical has been stretched inside out, confusing shysters and epicures alike, and yet true quality, personified in The John Adams Earbox, floats above it all like a sole Elysian flute.