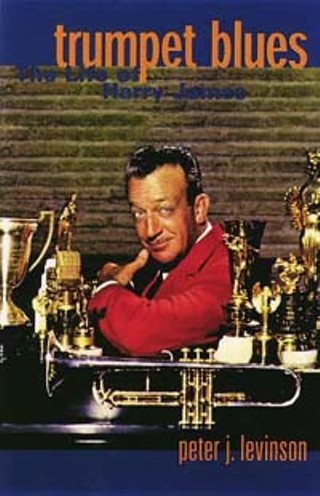 Artie Shaw refers to Harry Jameson on a jacket blurb as "a gifted American musician who, after trading his genuine musical talent for a tawdry parade of hollow perks, finds he has made a bad bargain," and calls James' story "a kind of contemporary American tragedy." There's a certain irony here, because the same thing could be said of Shaw. Unlike James, Shaw didn't drink and gamble to the point where it ruined his life, but Artie quit being a musician in his mid-40s when he was still evolving stylistically and could have accomplished a great deal in the decades ahead. Instead, confused about what he ultimately wanted from life, he gave up the thing he did best. I talked to Shaw at length a few years ago and found him very bitter and unfulfilled. He bragged a great deal to hide his insecurity. All you had to do was listen to him incessantly bad-mouth his old rival Benny Goodman to realize how screwed up he was. Which is a way of saying that in the long run we are all dead; we just choose different poison.

Both as a jazz musician and pop music phenomenon, James has been forgotten. Author Peter Levinson, a veteran jazz publicist, points out, though, that he had 70 records make the Billboard charts from 1938-53, while the Rolling Stones have only made them 41 times in 35 years. That may be reason enough to write a book about Harry James.

James, born in Albany, Georgia, was the son of a circus bandleader and trumpet virtuoso. He showed musical ability as a three-year-old drummer, and was performing in the circus before he went to elementary school. The James family settled in Beaumont, Texas, but James continued to work at the circus as a trumpeter, and when he was 12 he was a featured soloist. In his mid-teens James became a full-time professional trumpeter, and in 1935 joined the big band of noted jazz drummer Ben Pollack, with whom he first recorded.

James wasn't crazy about working for the demanding and not especially generous Goodman. In 1939 he left Goodman to form his own big band, and after struggling a few years became extremely popular. James received plenty of media attention because he had mass appeal and because he associated with other famous people like Frank Sinatra. His wife of 22 years was film star Betty Grable. Levinson seemingly has a favorable attitude toward James, but acknowledges that Harry was an alcoholic, an obsessive gambler who lost millions of dollars, and a driven womanizer. As if this weren't enough, he used to beat up Grable physically, though she continued to love him, and was such an irresponsible father that his kids sued him. A band member said of him, "He used to play keno at $110 a crack. He was afraid not to play, afraid to go to bed because he might miss something. He served all his appetites and all his desires. He wasn't terribly concerned with other people." Levinson attempts to explain James' behavior by citing his father's abuse of him as a child and the fact that he went to work as a full-time trumpeter at 15, missing some of his youth. That's possible, but so are other things that might explain his behavior.

Levinson does present us with a good deal of information about James' personal and professional life. He's not a particularly insightful analyst of music, but he knows about the business and social sides of the entertainment world, and he's worked diligently and effectively to portray James evenhandedly.