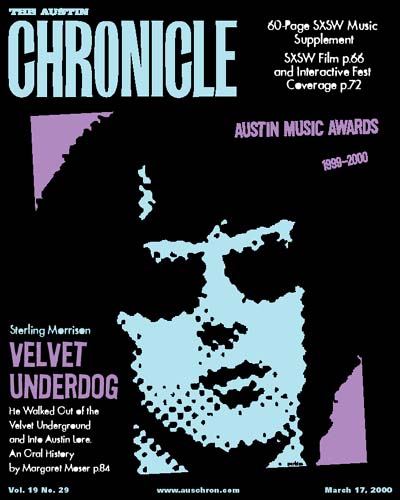 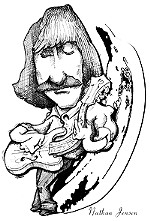 Kate Messer remembers when she first met Velvet Underground guitarist Sterling Morrison and they bonded over the Gibson SG like a couple of guitar geeks. 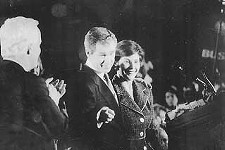 Run Out on a Rail

As usual, election night returns came slowly, turnout was low, and there wasn't much suspense.

Winners in the constables' races include incumbents Bob Vann and Bruce Elfant. Rocky Medrano and Maria Canchola go into a runoff for Precinct 4.

Gary Bradley agrees to sell 1,000 acres of land to the city

The Chronicle food staff's retinue of restaurants that visitors to Austin shouldn't miss.

Sipping Between the Lines

Picks of the Lists

Virginia B. Wood on the delights of Dolce Vita and her updates on Austin's restaurant scene.

Second Helpings: BBQ Joints Within an Hour of Austin

Cusines editor Virigina B. Wood and Chronicle writer Greg Beets serve up barbecue joints within an hour of Austin in this week's Second Helpings.
music

The High Fidelity, Park Avenue, 1am

The Frogs, Beerland@Gallery Lombardi Tent, 1am

A recap of favorite SXSW venues that no longer exist, a few festival hot tips, some non-festival tips, a celebrity-sightings checklist.

Lil' Brian and the Zydeco Travelers

I Am the World Trade Center, Emo's Jr.

Lil' Brian and the Zydeco Travelers

I Am the World Trade Center, Emo's Jr.

Journey to the End of the Night

You Ride the Pony (I'll Be the Bunny)

To All Our Fallen Heroes

Live in Berlin, Danny & the Nightmares

A Place in the Sun

I Am Shelby Lynne

'Til You've Seen Mine

The Long Wind Down

With Loving and Open Arms

What You Can't Do on TV

Enigma (Love Is a 4 Letter Word)

From Swastika to Jim Crow

Everything That Rises Must Converge

An Interview With Denise Caruso

The New Networks / Television of Tomorrow

So You're Creating an Internet Start-up

Longtime buddies Tommy Rosen and John Comerford drew on their own experiences following rock bands from city to city to write Around the Fire, a free-spirited paean to life on the road directed by John Jacobsen.

At the SXSW Interactive 2000 Festival, columnist Belinda Acosta takes a peek at the television of the future; also, director Kevin Smith fumes over the television version of his indie hit Clerks, and the Emmys announce a change in voting procedure.

All New Adventures of Laurel & Hardy: For Love or Mummy 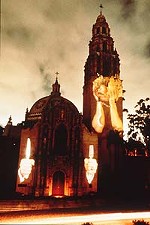 Installation art may be notoriously hard to define, but its role in art history isn't. It helped change the way we look at art, and the Blanton Museum of Art's survey of three decades of installation art, "Blurring the Boundaries," provides a window on the revolution.

Touring plans for the Rude Mechanicals; two two shows for theatregoers to see before they close.

STOMP turned the Paramount Theatre stage into a tidy salvage yard, where every piece of junk became a percussive instrument waiting to be heard.

The Apocalytes and the Tetragons: Psychic Blasts and Undulating Bodies

With the multimedia B-movie spoofs The Apocalytes and The Tetragons, composer-performers Chad Salvata and Sergio R. Samayoa serve up some well-scored soft-core sci-fi cyber-porn, heavy on the energy fielding (and the hyphens.

Aida: Outmatched by the Set

Austin Lyric Opera's Aida looks like a million bucks, but its stunning visuals are undercut by some less-than-grand human qualities.
columns

We are not sleeping.

Quote of the week: "You, my hyphenated friend, are an ambassador of evil."

In memory of a Shaman

Reports from a rare week of fashion activity in Austin.

The dirty South and the restless East.

The New American fare at The Range in Salado alone is worth the 45-minute drive from Austin.

Be true to your school!

Two drugs being developed from trees could help not only in the treatment of AIDS/HIV, but other diseases as well.