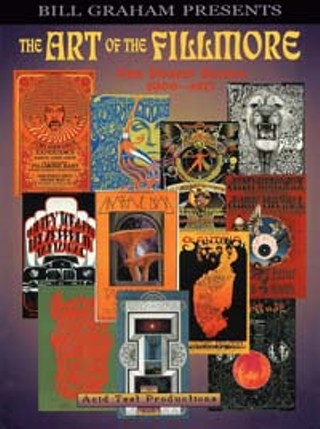 There was one essential difference between the San Francisco poster artists of the Sixties -- Stanley Mouse, Rick Griffin, Lee Conklin -- and those of other cities around the country, like Austin (Guy Juke, Jim Franklin, Micael Priest). One big, angry, magnanimous difference: Bill Graham. That The Art of the Fillmore: The Poster Series 1966-1971 is dedicated to the rock & roll mogul is his due; without Graham's patronage, and that of rival promoter Chet Helms, neither the San Francisco "Sound" -- Santana, Grateful Dead, Jefferson Airplane -- nor its small band of visual documentarians would have enjoyed the rich renaissance they did. The bold lettering over the title of this marvelous Pandora's book serves as both tribute and epitaph to the self-proclaimed impresario -- three words stamped with the trademark of quality: "Bill Graham Presents."

"The character of this art has a timeless, interactive [quality], allowing us to celebrate in the resonance of these events to this day," writes David Graham about his father, who was killed in a helicopter crash following a 1991 outdoor concert. They're glowing, actually -- alive! In the same way Van Gogh's last works scream the painter's madness, the posters advertising 1,001 nights of music at Graham's Fillmore Auditorium tingle with the afterglow of Sixties psychedelia. A three-square-foot tab of acid staplegunned to a telephone poll. A call to arms. "The posters were the branding of the counterculture phenomenon," reads a pull quote from Mouse -- pull quotes that sell this lovingly designed volume almost as much as the art. "It was a shot heard around the world and we knew it."

San Francisco, where the Berlin-born Graham (née Wolfgang Grajonca) settled in the Fifties after escaping the Holocaust, naturally became a cradle of the revolution. When the British came, they came to play the Fillmore. A Ginger Baker banner quote adorning Mouse's Nietzscheian rendering of Bruce, Baker, and Clapton: "Cream came to the Fillmore with an attitude that we were going to blow these Yanks off the stage, and we proceeded to do just that." Beginning with the seminal lettering technique and tuned-in/turned-on classicism of BGP's inaugural artist Wes Wilson, The Art of the Fillmore brings to life the rainbow spectrum of an American modern art movement finally being acknowledged for its own unique niche. The SFMOMA counts its own collection of the numbered series among its holdings.

Conklin's Daliesque surrealism, Griffin's demon humor -- Alton Kelly, Greg Irons, Victor Moscoso, Norman Orr, Randy Tuten, Davids Byrd and Singer -- graphic historians preserving the birth of America's youth culture. Bonnie MacLean, Wilson's successor and Graham's first wife (as well as David's mother), was not only critical to the Fillmore's establishment, her fascination with human faces remains a hallmark of the 287 posters in the run, which came to end when the live music venue closed on July 4, 1971. By design, The Art of the Fillmore: The Poster Series 1966-1971 is just a chip off the definitive, encyclopedic Art of Rock, yet it rises as a monument to one of the towering figures in rock & roll. "What's significant about the posters is that they were created with an intensity that has lived," MacLean says. "Emotions were real. We were all living in the moment."