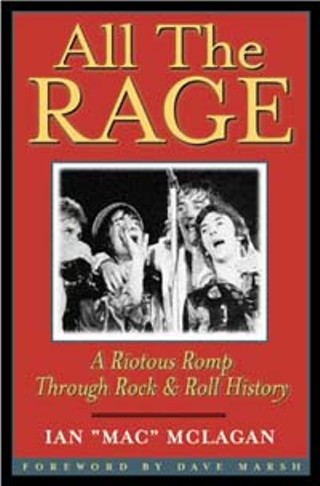 All the Rage: A Riotous Romp Through Rock & Roll History

Ian McLagan was a member of not just one, but two of the greatest bands in rock & roll: Small Faces (McLagan, Steve Marriott, Ronnie Lane, and Kenney Jones) and the Faces (McLagan, Lane, Jones, Rod Stewart, and Ron Wood). He's played with all the greats: Dylan, the Rolling Stones, Bonnie Raitt, Bruce Springsteen, Paul Westerberg -- an endless list. This is the U.S. paperback edition of his 1999 British hardcover autobiography, the same with a different cover, new intro, mistakes corrected, and somewhat incomplete sessionography appended.

Barely a half-dozen excellent music biographies exist out of the thousands published. There are even fewer excellent autobiographies, which are typically ghostwritten by a die-hard fan and rarely rise to the level of revealing insight, much less decent literature. And autobiographies almost invariably whitewash the truth, plodding along through their stories. All the Rage breaks all the rules -- a rock & roll autobiography written by the artist on his own computer with no ghostwriter, that manages to be highly entertaining and tells the truth with no punches pulled or mistakes covered up. As Dave Marsh points out in his new foreword, the real revelation is not that Mac is a great storyteller -- anyone who has talked to him for even half an hour knows that -- but that at times he is a genuinely great writer.

All the Rage is an excellent read whether in small bits or gulped in a single long session. It's an in-depth picture of what it was really like to be in the eye of the hurricane as teen sensations (Small Faces, who racked up 14 consecutive hit singles in England in the Sixties) and as part of two of the most popular bands in the world (the Faces and the Stones), both on the road and in the studio. Drug consumption, alcohol-fueled Most Embarrassing Moments, the backstage excesses -- it's all here in spades. You'll also find some very heartfelt and astute observations about some of the biggest characters in rock -- Steve Marriott, Keith Moon, Keith Richards, Ronnie Lane, and Ian Stewart -- from one who saw it close up. And saw it all.

If you buy only one rock bio or autobiography, this just may be the one you need. It's all here: the laughter, the pain, the drugs, the drink, the women, and the hard times, all told in a captivating, insightful, and ever-opinionated manner. C'mon, Mac, whaddaya really think about the Grateful Dead?

All the Rage: A Riotous Romp Through Rock & Roll History, Ian McLagan